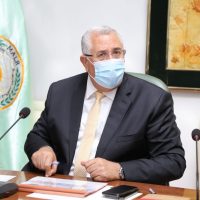 Al-Qaseer, Minister of Agriculture and Land Reclamation, said that the state is currently providing the necessary funding to modernize the irrigation system through a ten-year, interest-free loan.
Al-Qusayr said – during his inspection, accompanied by Dr. Tariq Rahmi, Governor of Gharbia, one of the fields that uses modern irrigation methods (sprinkler and drip) and is planted with vegetables and strawberries – that modern irrigation has many benefits for farmers, including increasing productivity, reducing production requirements costs, and reducing costs of fuel and energy use. Weed control, water conservation, as well as the rationalization of the use of fertilizers, seeds and pesticides.
During the expanded conference, held by the Minister of Agriculture and the Governor of Gharbia, with the participation of Alaa Farouk, head of the Agricultural Bank, Al-Qusair reviewed the national projects that Egypt is currently witnessing during the era of President Abdel Fattah Al-Sisi, whether in the field of horizontal expansion and land reclamation or livestock, fish and poultry projects.
He pointed out that the financing of the veal project exceeded 5.6 billion pounds, in addition to the project to develop milk collection centers, and other projects aimed at achieving food security for citizens.
He stressed the directives of the President of the Republic to permanently prevent the encroachment on agricultural land as it is a national wealth and the main source of food.. He stressed the importance of continuous communication with farmers by all the leaders of the Ministry, each according to his position, to deliver indicative information, follow modern agricultural practices, and raise awareness of the important initiatives launched by the Ministry As well as removing any obstacles or problems facing farmers and solving them on the ground.
The Minister of Agriculture directed the development and deepening of the role of agricultural cooperatives, and increased communication with farmers, noting that the last seven years witnessed an unprecedented renaissance in the agricultural sector, thanks to the continuous support of the political leadership and direct interest from President Abdel Fattah El-Sisi.
For his part, the Governor of Gharbia expressed his happiness with the visit of the Minister of Agriculture and the fruitful cooperation between the ministry and the governorate, stressing that Al Gharbia is an agricultural governorate and has many activities for agricultural, animal and poultry production and is famous for cultivating all crops and the area of ​​agricultural land is about 400,000 acres.
In turn, the head of the Agricultural Bank said that the bank is the home of the Egyptian farmer, and there are many initiatives launched by the bank in cooperation with the Ministry of Agriculture aimed at providing all support to farmers, especially the young ones, such as the irrigation development initiative and the veal project.

The article, Minister of Agriculture: The state provides the necessary funding to modernize the irrigation system without interest, was written in Al Borsa newspaper.