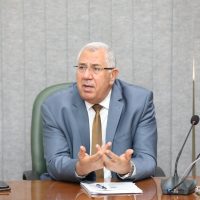 The Minister of Agriculture and Land Reclamation, Mr. El Kassir, affirmed that the ministry has made great efforts to achieve comprehensive agricultural development in the various governorates of Egypt, achieve food security, and agricultural projects that are currently being implemented, as well as the initiatives adopted by the state to improve the livelihood of farmers and increase their incomes.
This came during a meeting held by the Minister of Agriculture and Governor of Gharbia, Tariq Rahmi, with a number of deputies of the House of Representatives and Senate in the governorate, farmers, media professionals and heads of agricultural cooperative societies, at the governorate’s general office.
Al-Qusair answered the attendees’ inquiries about a number of topics, foremost of which are: the projects of the “Decent Life” initiative, the transition to modern irrigation systems, efforts to confront encroachments on agricultural lands, public benefit projects, milk collection centers, and the national project to revitalize veal.
The meeting touched on the recent efforts made by the Ministry of Agriculture to reduce the phenomenon of rice straw burning. The head of the agricultural extension sector, Dr. Alaa Azzouz, confirmed that the total area planted with the rice crop in Gharbia Governorate amounted to about 77 thousand feddans, noting that so far 41 thousand feddans have been harvested, amounting to 53 percent of the total cultivated area.
He added that 18 rice straw gathering sites were established in Gharbia Governorate, and about 1,500 extension activities were organized, including guidance and awareness seminars and meetings with agricultural officials and farmers, as well as field days and harvest days.
The head of the agricultural extension sector confirmed that the farmer is now aware of the economic value of rice straw, and that it has a number of important uses, chief among them: its use in the manufacture of non-traditional fodders and organic fertilizers, in addition to a number of other industrial uses, pointing out that this year it began using it. in flat timber, which contributes to reducing its import.
Azzouz pointed out that the system has borne fruit and succeeded in eliminating the black cloud over the past years and reducing environmental pollution.
The Minister of Agriculture had visited Gharbia Governorate, during which he inspected a number of agricultural projects in the governorate.

The article, Minister of Agriculture: We have made great efforts to achieve comprehensive agricultural development in the various governorates, was written in Al Borsa newspaper.