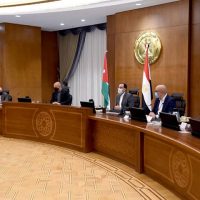 Butcher: Implementation of 100 km of bridges and tunnels, 10,000 km of equipped roads, 20 neighborhoods and 100 residential neighborhoods

El-Gazzar added that the new capital, with its privileged location, is close to the upcoming June 30 axis from the city of Galala and extends to Suez, Ismailia and Port Said, in addition to the other road network and tunnels, which will play a major role in achieving comprehensive development in various parts of Egypt.

The Minister of Housing said that the administrative capital is in the middle of a group of cities of the first, second and third generation of new urban communities, pointing to the Urban Communities Authority since its inception in 1979, and until 2014 it built about 21 new urban communities, over three generations, and from 2014 until now we are working in 25 A new urban community, in order to achieve the national goal, which is to increase the urban area.

The Engineering Authority implemented 39 projects in the capital, in which 757 companies and 173 thousand engineers, technicians and workers participated

The minister pointed out that an important part of the idea of ​​choosing the location of the new administrative capital was linked to the desire to achieve integration with road networks and economic hubs, such as logistical areas, as we have a large group of regional roads, and we seek to revive the idea of ​​mass transportation to reduce pressure on roads, with a large number of The means, including the monorail and the electric train, which will connect the north to the south and the east to the west, and the high-speed train as well, which connects Ain Sukhna to the administrative capital of Cairo in the 6th of October city to the new city of El Alamein, all of which are projects under implementation, to link this between the development areas of the Red Sea coast, with the development areas On the Mediterranean coast, all of which were inputs to the strategic development plan that the state is working to implement.

The Minister of Housing confirmed that the Urban Communities Authority will receive, within days, from the United Nations, the first prize for the best entity implementing sustainable urban development projects in the world, through what the Authority is doing, explaining that Cairo will remain a center for heritage, history and culture, with a unique mixture of civilizations, to be the capital El Jadida is a center for finance, business and the economy, and together they represent the capital of the Egyptian state.

The Minister of Housing said that there are 7 determinants in the implementation plan of the administrative capital projects, the first of which is to be a green city through large green areas, the per capita share of these areas and open spaces reaches 15%, indicating that through the field tour, the Jordanian delegation will get to know the square Al-Shaab It is a very large garden, which connects between the Mosque of Egypt and the Republican Palace. The delegation will also get acquainted with the Green River with an area of ​​1,000 acres of gardens and parks.

The minister added that the administrative capital is a city connected to a mass transportation network, such as the train, the subway, the tram, the trolleybus, and the taxi, and all these elements are linked together, and it is also an electronic smart city, pointing out that the term “smart” here does not mean that buildings are monitored. With cameras only, it does not mean that electronic applications will be relied only on the management and operation of all facilities and buildings in the capital, starting with scheduling buses through these applications, in addition to controlling green spaces and irrigating them according to temperature and humidity, but rather that it is smart in providing services electronically. As well as for citizens in various fields.

The administrative capital is also a city of finance and business that serves the Cairo region. Al-Jazzar said: If we talk in the language of numbers about the administrative capital, it can be said that it has bridges and tunnels about 100 km long, and 250 km of mass transportation for mass transportation, and 10 thousand of equipped roads, as well. The city provides 2 million job opportunities, 20 residential neighborhoods, and 100 residential neighborhoods, and upon completion, it will accommodate 6.5 million Prime Time Zone.

The Minister of Housing indicated that we are currently implementing 25 fourth-generation cities, and there are criteria for establishing smart cities, pointing to the establishment of a smart city unit in the New Urban Communities Authority, and we are cooperating with all institutions and advisory offices, and the United Nations Office for Human Settlements, indicating that it will be within The coming period will announce the code for smart and sustainable cities, as well as the code for quality of life.

The position of the implementation of the Central Business District, which is adorned by the iconic tower, the tallest in Africa, was reviewed, and next to it is the Banks District, which will host the Central Bank of Egypt building, in addition to the headquarters of about 38 local and international banks, which will be keen to be in the heart of the new capital, coinciding with the government’s move there. Currently, 13 banks are being implemented, including the Central Bank.

The Minister of Housing also dealt with the position of implementing housing projects in the new administrative capital, which include a number of neighborhoods with a total of about 120,000 units implemented by the Ministry of Housing and the Engineering Authority of the Armed Forces.

The work progress in implementing the City of Culture and Arts in the new capital, which will include a number of theaters, cinemas, exhibition halls, libraries, museums and art galleries, for all kinds of traditional and contemporary arts, such as music, drawing, sculpture, handicrafts, etc., in addition to the Artistic Creativity Center for Young Creators, and libraries The city of Arts and Culture was built on an area of ​​about 127 acres.

Major General Ihab El-Far, head of the Engineering Authority, presented a report in which he explained that the authority succeeded in implementing 39 projects in the new administrative capital, implemented by about 757 companies, with a total of 173,000 engineers, technicians and workers, and 1,411 engineering equipment.

The article, Minister of Housing: The Administrative Capital provides 2 million job opportunities and, upon completion, will accommodate 6.5 million Prime Time Zone. It was written in Al Borsa newspaper.