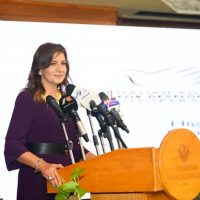 Ambassador Nabila Makram Abdel Shaheed, Minister of State for Migration and Egyptians Abroad Affairs, inaugurated the activities of the conference “The Role of Cash Transfers in Increasing Investment and Achieving Sustainable Development”, this morning, Sunday, which is being held in cooperation with the International Organization for Migration and the Italian Agency for Development Cooperation, with the participation of Dr. Hala Al-Saeed, Minister of Planning and Development The conference will discuss ways to increase support for the contributions of Egyptians abroad in national development.

During her speech at the beginning of the conference, Ambassador Nabila Makram welcomed all the attendees and said that Egypt ranks fifth in terms of remittances from Egyptians abroad, and despite all the challenges, Egypt was able to address all these economic challenges, we made a leap in remittances.

Ambassador Nabila Makram added that this historical increase is due to many reasons, the most important of which is the confidence of the Egyptian citizen in the political leadership and in all decisions taken, economic measures, exchange rate stability, the investment climate, the economic reform program, as well as real estate investment.

The Minister of Immigration explained that with all these reasons, the Ministry of Immigration had to work to enhance this confidence, pointing to cooperation with the Ministry of Planning in the fifth edition of the “Egypt Can” conferences, and said: “More than 50 Egyptian investors abroad participated with us and we worked to present opportunities. We also visited national projects, which yielded many results, and Egyptians abroad set up many projects in their homeland, and I am happy and proud of these results.”

And she continued: “We also worked with the Egyptian Stock Exchange to invest in the Egyptian capital market, and a cooperation protocol was signed with the stock exchange to encourage Egyptians abroad to invest in the Egyptian Stock Exchange, as well as establishing a special unit in the General Investment Authority for Egyptians abroad, which directs Egyptian investors abroad to set up the project they want to invest. It, as we worked with the House of Representatives, and we are working to raise and raise the status of the country and refute all the rumors that are promoted abroad, in addition to the role of the Nasser Higher Military Academy in clarifying the facts to Egyptians abroad and what is happening on the land of Egypt in terms of development and achievements.

At the conclusion of her speech, the Minister of Immigration extended her sincere thanks to Dr. Hala Al-Saeed, Minister of Planning and Economic Development, Ambassador Mohamed Khairat, Assistant Minister of Migration for International Cooperation and International Organizations Affairs, Mr. Laurent De Boeck, Head of Mission of the International Organization for Migration in Egypt, and Dr. Martino Melli, Director of the Italian Agency For development cooperation, in preparing and participating in this conference, expressing its aspiration to achieve successful discussions that will bear fruit for Egyptians abroad.

The conference aims to discuss ways to increase support for the contributions of Egyptians abroad to national development through the pillars of participation identified by the International Organization for Migration, which are: cash transfers, skills transfer, cultural heritage promotion, charitable work, as well as trade and investment, in addition to holding a dialogue and gathering ideas and contributions of experts to support Formulate serious recommendations to direct cash transfers towards social and economic development in Egypt.

The article, Minister of Immigration: Egypt ranks fifth in remittances from Egyptians abroad, was written in Al Borsa newspaper.