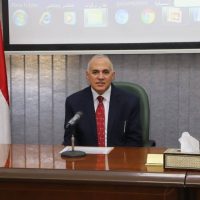 Dr. Mohamed Abdel-Aty, Minister of Water Resources and Irrigation, announced that Egypt’s candidacy as Chairman of the Council of African Water Ministers (AMCOW) for the next session during 2023 and 2024 was unanimously approved, in recognition of Egypt’s important role on the African arena, and the new Executive Secretary of the Council was chosen.
This came during the participation of the Minister of Water Resources and Irrigation today in the extraordinary meeting of the Executive Council of the Council of African Ministers of Water via video conference technology.
In his speech during the meeting, Dr. Abdel-Aty saluted the members of the Executive Council, stressing Egypt’s keenness to support development in all African countries through the implementation of many projects in the field of water, with Egypt’s readiness to exchange experiences and provide technical support in the field of water resources to all African countries.
For his part, Carl Hermann Gustaf, the current president of the council and the Namibian Minister of Agriculture and Water, stressed the importance of water as one of the most important elements of sustainable development in the countries of the world, pointing out that the Nile River is the main lifeline in Egypt, and there is no alternative to it. He also called for activating the council’s role in achieving cooperation. Among African countries in the field of joint water management.
During the meeting, the ministers endorsed the recommendations submitted by the council’s technical advisory committee.
The Executive Council of the Council of African Ministers of Water (AMCOW) is the institutional body concerned with the water file under the umbrella of the African Union.
It is worth noting that the meetings of the Technical Advisory Committee of the Council were held on October 6 and 7, with the participation of representatives from the Ministry of Water Resources and Irrigation. And he presented the progress made in the process of monitoring and reforming the water and sanitation sector (WASSMO), where Egypt welcomed providing technical support to any African country in the field of data collection to prepare the assessment report and follow-up at the continental level, and presented the Council’s achievements report for the year 2020 and mid-year. In 2021, where the African Sanitation Policy Guidelines were launched in June 2021, in addition to presenting the progress made in the African Groundwater Program, presentations were also made on human resources and the Council’s budget, and ways to provide technical support to African countries to raise their efficiency in the use of their water resources And discuss many technical and administrative issues of the Council.

The article, Minister of Irrigation: Egypt to chair the Council of African Water Ministers for the next session, was written in Al Borsa newspaper.