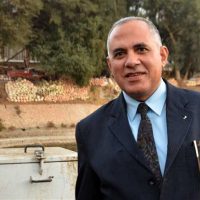 The Minister of Water Resources and Irrigation, Dr. Mohamed Abdel-Aty, affirmed that Egypt’s renewable water resources are limited, most of which come from the waters of the Nile River, in addition to very limited amounts of rainwater and deep groundwater in deserts.

On the other hand, the size of the deficit between the available and the actual need amounts to 90% of renewable resources, and this gap is compensated by reusing agricultural drainage water and surface groundwater in the valley and delta, in addition to importing food products from abroad.

This came during a meeting held by the Minister of Water Resources and Irrigation with a delegation of international organizations working in the field of water resources management, headed by Elena Panova, the United Nations Resident Coordinator in Egypt, Sylvain Merlin, Acting Resident Representative of the United Nations Development Program in Egypt, and representatives of the European Union and the embassies of the United States and Britain. Germany, the Netherlands and Finland, where a strategy and a water management plan until 2050 were discussed to confront the negative effects of climate change and the resulting increase in the intensity of marine storms, sea level rise, temperature rise, and other extreme weather phenomena.

The Minister of Irrigation said that during the meeting, the negative effects of climate change on the water sector and the Egyptian coasts were reviewed, which prompted the Ministry of Water Resources and Irrigation to implement several important projects in the field of protection from the dangers of torrential rains and the protection of Egyptian beaches, with the aim of protecting individuals, facilities and investment projects in various governorates. Republic.

He added that the Egyptian water situation and the size of the challenges facing the water sector in Egypt were presented, especially the population increase and climatic changes.. He pointed out that Egypt has distinguished national experiences in the field of water resources and irrigation, which enables it to deal with such challenges with the utmost efficiency.

Dr. Abdel-Aty also reviewed the developments of the Nile water issue and the current position regarding the negotiations on the Grand Ethiopian Renaissance Dam, pointing out that the volume of green water (rainwater) in Ethiopia, which amounts to more than 935 billion cubic meters annually of water, and that 94% of Ethiopia’s land Green land, while the percentage of green lands in Egypt is only 4%, and that Ethiopia owns more than 100 million head of livestock, consuming 84 billion cubic meters annually, which is equal to the share of Egypt and Sudan combined, in addition to its consumption of blue water, of which 55 billion is stored. A cube in Lake Tana, 10 billion in the Tekizi Dam, 3 billion in the Tana Pulse Dam, 5 billion in the Fincha and Charchara dams, and a group of small dams other than 74 billion in the Renaissance Dam. The potential of groundwater in Ethiopia with a total of 40 billion cubic meters annually, located at depths of only 20 to 50 meters from the surface of the earth, is renewable water, while the groundwater in the deserts of Egypt is considered non-renewable water.

He stressed Egypt’s keenness to complete the negotiations, while emphasizing Egypt’s constants in preserving its water rights and achieving benefit for all in any agreement on the Renaissance Dam, and emphasizing the pursuit of a just and binding legal agreement for all that meets the aspirations of all countries in development, while emphasizing that the Grand Ethiopian Renaissance Dam and its impact On the waters of the Nile River, it is considered one of the major challenges facing Egypt today, especially in light of the unilateral measures taken by the Ethiopian side regarding the filling and operation of the Renaissance Dam, and the huge negative repercussions that these unilateral measures result in.

Dr. Abdel-Aty referred to the navigational link project between Lake Victoria and the Mediterranean, which aims to transform the Nile into a navigational artery linking the Nile Basin countries, which is one of the vital regional projects that brings together the basin countries, considering that river transport between countries is one of the best means capable of transferring trade movement of all kinds. And their volumes with low cost, lower energy consumption and higher safety rates compared to other means of transportation.

He explained that the challenges facing the water sector require making strenuous efforts to confront them, whether at the societal level, through citizens’ awareness of the importance of rationalizing water and preserving it from all forms of waste and pollution, or at the governmental level through many major projects that the state is implementing or through legislative development. .

The Minister of Irrigation pointed out that Egypt is preparing a strategy for water resources until 2050, and a national plan for water resources until 2037, at a cost of up to 50 billion dollars, which is expected to increase to 100 billion dollars, based on four axes that include rationalizing water use, improving water quality and providing additional water sources. Creating a climate for optimal water management.

He said that at the level of national projects aimed at rationalizing water use and maximizing the return from the water unit, the Ministry of Water Resources and Irrigation is currently implementing the national project for the rehabilitation of canals, which aims to improve the process of water management and distribution, and deliver water to the ends of the tired canals, in addition to the tangible economic, social, cultural and environmental returns. Also, a project to rehabilitate mesqas was launched to complete the process of rehabilitating the waterways network in an integrated manner, and to launch the national project for the conversion from flood irrigation to modern irrigation systems, and to encourage farmers to this transformation, because of the clear importance of these systems in rationalizing water consumption.

The Minister of Irrigation referred to the projects to protect against the dangers of floods, where more than a thousand protection facilities have been implemented during the past years, and the implementation of many major projects in the field of reusing agricultural drainage water, such as the project to benefit from the water of the Bahr al-Baqar drain in the east of the delta and to benefit from the waters of the western delta drains. The Al-Mahsama Bank project, in addition to the establishment of more than 100 intermediate mixing stations, and the implementation of several projects to rehabilitate water facilities such as the Assiut Barrage and Dayrut Barrage, strengthening the Zefta Barrier, and modernizing the Esna lock and the Damietta Dam lock, and the Ministry’s agencies continue to take all necessary measures to remove the encroachments on the Nile River, canals and drains. In coordination with the various state agencies.

On the level of legislative development, Abdel-Aty confirmed that the Ministry of Irrigation has prepared the new water resources and irrigation bill, which was finally approved by the House of Representatives, and its executive regulations are currently being prepared, with the aim of improving the process of developing and managing water resources, achieving fair distribution to all uses and beneficiaries, and protecting water resources. Water resources and the network of waterways from all forms of encroachment.

A delegation of countries and international organizations had visited Kafr El-Sheikh Governorate to learn about the pioneering experience of the Ministry of Water Resources and Irrigation to adapt to climate changes through implementing projects in the field of beach protection, canals rehabilitation and modern irrigation. Modern irrigation carried out in the control of 1,700 acres on the canal, and beach protection works carried out in front of the village of Mastorouh, with a length of 7 km, and east of the industrial city in Toubas, with a length of 5 km.

Representatives of countries and international organizations praised the projects that the Ministry of Water Resources and Irrigation is implementing in the field of adapting to climate changes, such as beach protection projects, protection projects from flood hazards, and projects to rehabilitate canals, canals and modern irrigation, which work to increase the efficiency of the water system in dealing with impacts. negative climate change.

The article, Minister of Irrigation: Egypt’s renewable water resources are limited, mostly from the Nile water, was written in Al Borsa newspaper.