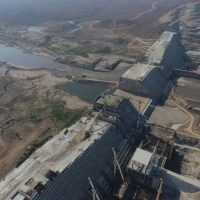 The Minister of Water Resources and Irrigation, Dr. Mohamed Abdel-Aty, said that the situation with regard to the Grand Ethiopian Renaissance Dam is now almost frozen, pointing out that there are international contacts, but they do not live up to our ambitions, and therefore the situation is almost frozen.

The Minister of Irrigation added – during a press conference in the presence of Karam Jabr, head of the Supreme Council for Media Regulation, a number of editors-in-chief and heads of newspaper boards, and a number of media professionals and journalists – that the concern about the Renaissance Dam is natural, and anxiety should not be satisfactory.

The Minister of Irrigation said that the ministry deals with the accumulation of 50 years ago in the file of violations, stressing that the state is taking a confrontational approach and delivering a clear message to those who encroach on the Nile River by law.

He added that the state does not tolerate the issue of water, and that the priority is to rationalize, lining canals and reusing water to meet the state’s water needs, pointing to the opening of the Bahr al-Baqar station.

Abdel-Aty explained that the state in 2016 made a strategic decision that any development on the coasts would be through desalination of sea water to keep pace with the population increase to maximize the use of every drop of water.

The Minister of Irrigation stressed the importance of the canal lining project, which led to good water reaching the ends of the canals, pointing also to the project to modernize irrigation systems and the great support from the state to farmers in this matter by providing interest-free loans.

The article, Minister of Irrigation: Negotiations over the Renaissance Dam are almost frozen, and we will not allow a water crisis to occur. It was written in Al Borsa newspaper.