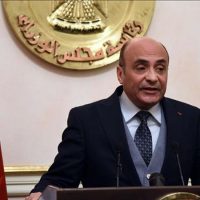 Minister of Justice Counselor Omar Marawan said, “President Sisi appreciates and respects the Egyptian judiciary, and today affirmed that Egypt is a state of law and that the judiciary has complete independence.”

Marwan added, during a telephone conversation with the program On My Responsibility, presented by the journalist Ahmed Moussa, via the “Echo of the Country” channel, this Saturday evening: “For the first time in the history of Egypt and during the era of President Sisi, we will have a unified day to celebrate the Judges’ Day for all judicial authorities.” That today’s celebration has a great affirmation, meaning and moral impact on the members of the judicial bodies, which is unprecedented.

And he continued: “It is now available in the courts, the ability to file a lawsuit remotely, and renew the detention remotely as well, and a “speaker litigation” was successfully tested through the “video conference” screen, which is a great step and for the first time it has been circulated, indicating that the Economic Court succeeded. In conducting a full trial remotely via video conferencing, experiments were also conducted to convert speech into written text away from the writing of the session secretary.

He stressed that some organizations have foreign agendas and are engaged in campaigns of skepticism against court rulings.

Article Minister of Justice: President Sisi appreciates and respects the judiciary and confirms that Egypt is a state of law that was written in Al Borsa newspaper.