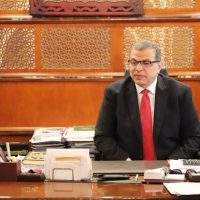 Mohamed Saafan, Minister of Manpower, stressed the need to develop a five-year plan at least, or until 2030; To reduce the unemployment rate among women in Egypt, expressing his hope that the facilitating committee for preparing the national plan to promote gender equality will contribute to reducing the unemployment rate among women by 2% annually.

This came while the Minister of Manpower chaired, today, Tuesday, the first founding meeting of the facilitating committee; To prepare the national plan to promote gender equality at work with the participation of representatives of 6 ministries, the International Labor Organization, the Central Agency for Public Mobilization and Statistics, the National Council for Women, the Federation of Egyptian Industries, Chambers of Commerce and the General Federation of Egyptian Trade Unions.

Saafan said that the political climate in Egypt – under the leadership of President Abdel-Fattah El-Sisi – is one of the brightest periods in Egypt with regard to women’s rights, pointing out that it is not hidden from anyone that the Egyptian state offers women the rights, explaining the important positions they occupy, including their representation. In the government by almost a quarter, as well as its representation in the House of Representatives and the Senate, the Supreme Constitutional Court and finally in the State Council, noting that the central departments of the ministry have more than 50% of women thanks to their efforts and efficiency.

He made several proposals, including raising awareness of the importance of work for women, especially in the Egyptian countryside and Upper Egypt, and studying the obstacles that prevent women from entering the labor market, in addition to creating the appropriate climate so that they can perform the societal and family roles entrusted to them outside work.

He suggested that cooperation with rural women pioneers be done in spreading awareness and achieving the goals of the national plan because of their potential to reach women in their homes, stressing the importance of adhering to the timetable set for each of the goals so that there is a tangible result on the ground, directed by activating the sub-committees of the national plan to promote Gender equality at work in 27 governorates to work in the same framework and put practical steps with tangible results.

Saafan thanked the International Labor Organization and the work team for the effort exerted in setting the general framework of the plan in light of the circumstances the world is going through from the Corona pandemic, stressing that despite these challenges, there are results that appeared on the ground in a short time, wishing for further achievement during the period. coming.

For his part, Muhammad Attia Al-Fayoumi, Secretary of the General Union of Chambers of Commerce, MP in the House of Representatives, explained that the political climate enables us to implement the plan well, calling on the committee based on work to monitor and limit any legislation that hinders women’s work and demand its amendment in Parliament, noting that legislation can be used to motivate women to work.

During the meeting, the committee presented the general framework of the plan that targets both men and women, and its principles are economic empowerment, equality, protection, cultural and societal privacy, participation and partnership.

It also reviewed an overview of the Gender Equality Unit at the Ministry of Manpower, which was established in January 2019 with the aim of increasing the employment rates of women through the care and protection of working women, and working to provide a safe work environment for both men and women. The unit works to address the gap between males and females Whether in training opportunities and skills development or in employment operations.. The unit exercises its activities through qualitative committees, most notably the Women’s Employment Committee, the Vocational Training Committee, the Legal and Legislative Affairs Committee, and the International Labor Standards Committee.

The unit carried out many activities – during the last period – most notably training the members of the central unit on the concepts of gender, equality, prevention of discrimination and leadership skills, and a training of trainers course. and “Training of labor and occupational safety and health inspectors.” A guide was also completed for the inspector to identify the inspection axes related to women, equality, the prevention of discrimination and the way to deal with it.

The presentation by the Ministry of Manpower indicated the success of the unit headed by Minister Mohamed Saafan in lifting the long-standing ban on the employment of women in many professions, as international labor standards developed this ban and the decisions regulating this have not been developed in Egypt since 2003.

He pointed out that – last April – the minister issued decisions (43 and 44) ​​granting women complete freedom to choose the profession they work at the time they want, while obligating business owners to provide them with the necessary protection and to provide the necessary protection for pregnant and breastfeeding women from work that harms their health, as well. A special website for the Equality Unit has been created, in cooperation with the International Labor Organization, http://manpower.netwaveserver.com/ar/home/, and it can help women to submit any complaints or suggestions.

The article, Minister of Manpower: We plan to reduce the unemployment rate among women by 2% annually, was written in Al Borsa newspaper.