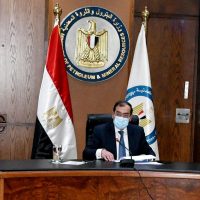 Engineer Tarek El Molla, Minister of Petroleum and Mineral Resources, discussed with Dr. Walid Fayyad, the Lebanese Minister of Energy and Water, who is currently visiting Cairo, the special procedures for the rapid arrival of Egyptian natural gas to Lebanon via Jordan and Syria, within the framework of what was agreed upon in the meeting held last month in Jordan.

In a statement today, Monday, El-Molla stressed that cooperation between the two countries has a strategic goal rather than a commercial one, within the framework of Egypt’s support for brotherly Lebanon, and its contribution to solving its energy problem and supporting the stability of the Lebanese state.

For his part, the Lebanese minister, who is visiting Egypt on his first visit outside Lebanon after he was recently assigned the tasks of the Ministry of Energy in the Lebanese government, expressed his gratitude and appreciation for the Egyptian role in helping and supporting Lebanon, noting that the supply of Egyptian natural gas represents a strategic relationship between the two countries in the field of energy as The cornerstone of contributing to solving the energy problem in Lebanon.

The statement indicated that an expanded meeting will be held between the delegations of the two countries to reach a final version of the contract, noting that the countries participating in the ministerial meeting of the Arab Gas Pipeline countries agreed last September to deliver Egyptian natural gas to Lebanon via Jordan and Syria.

It is noteworthy that planning began for the Arab gas pipeline in the late 1990s, with a length of 1200 km, and aims to transport Egyptian gas to Jordan, Syria and Lebanon. Egypt began pumping 28 million cubic feet of gas per day to Lebanon in 2009, through a clearing process with Syria, so that Egyptian gas would reach Damascus , while Syria supplies Lebanon with gas from Homs, and as of March 2012 the export of Egyptian gas to Syria has completely stopped due to the political turmoil in the region and the lack of Egyptian gas production.

The article, Minister of Petroleum: Egypt seeks to contribute to solving the energy problem in Lebanon, was written in Al Borsa newspaper.