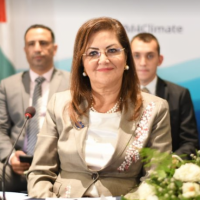 Dr. Hala Al-Saeed, Minister of Planning and Economic Development, participated in the second ministerial meeting for the environment and climate change of the Union for the Mediterranean, in the presence of Dr. Yasmine Fouad, Minister of Environment, Frans Timmermans, Vice-President of the European Union Commission, Green Deal, Nasser Kamel, Secretary-General of the Union for the Mediterranean, with the participation of ministers and representatives of 42 Mediterranean countries.

During her speech, Dr. Hala Al-Saeed, Minister of Planning and Economic Development, said that the Mediterranean region, especially in the south of it, faces many social and economic challenges, which have recently been exacerbated by the impact of environmental degradation, climate change and water scarcity.

She noted the IPCC’s 1.5°C scenario report that warming in the Middle East and North Africa region is expected to be higher than the global average, even under the more optimistic 1.5°C scenario.

She noted that the Middle East and North Africa region will continue to suffer from the effects that exceed its capacity to adapt, from rising temperatures, rising sea levels, sudden changes in rainfall rates, in addition to extreme weather events.

She explained that such successive challenges pose significant risks to agriculture and food security, which could lead to a reversal of hard-earned development gains, while also taking into account the root causes of the “climate change-induced migration” phenomenon.

Al-Saeed added that water is a major concern and priority, and although “water” is not mentioned in the Paris Agreement, it remains an integral part of the fight against climate change, which is now increasingly having an impact on water security, in addition to the impact of other mega-projects across borders.

Al-Saeed added that the outbreak of the Corona virus is a game-changer, which is manifested by its harmful effects on health and livelihoods, in addition to its long-term geographical and sectoral effects. Resilience, which was reflected by redefining national priorities, focusing on universal health insurance, supporting the poorest, expanding social protection networks, as well as accelerating digital transformation.

Al-Saeed explained that despite the challenges, the Egyptian government had faith that this challenge might represent an opportunity to promote and integrate the concepts of green and circular economy into the recovery process, while ensuring the implementation of key principles in terms of achieving “inclusive growth” and “leaving no one behind.” .

She emphasized that the Egyptian government has adopted a participatory approach that includes all relevant stakeholders, including the private sector, civil society, academia and research, as well as regional and global development partners. Everyone has a role in achieving sustainable development and promoting a green recovery from the pandemic.

Al-Saeed added that those policies included, at the level of the institutional structure, governance and policy framework, that the Egyptian government is currently updating its sustainable development strategy (Egypt Vision 2030), which will be launched soon, to respond to emerging challenges, including population growth, climate change and water scarcity, taking into account changes Regional Geopolitics Taking into account the impact of the coronavirus, he added that Egypt launched the second phase of its national structural reforms program, which includes a wide range of radical reforms.

Al-Saeed also referred to the launch by the Ministry of Planning, in cooperation with the Ministry of Environment, of the Environmental Sustainability Standards Manual, with the aim of making the investment plan green, pointing out that Egypt, as the first country in the Middle East and North Africa, launched “green bonds” worth $750 million, to finance projects. He added that the Egyptian private sector is preparing to launch “private green bonds” with a value ranging between 120-200 million US dollars.

Al-Saeed added that Egypt is currently preparing three other national strategies, including the “National Strategy for Climate Change”, provided that this strategy is consistent with the updated Vision 2030, and will include all aspects of climate change, as well as the “National Hydrogen Strategy”, to explore opportunities for production and use of hydrogen. And hydrogen transfer as an energy source, especially blue and green hydrogen, in addition to the “National Water Resources Strategy”

Al-Saeed stressed the importance of the participation of all stakeholders, especially the private sector, which represents the cornerstone of successful climate policies. To achieve this, the Egyptian Sovereign Fund participated in investments in projects that promote renewable energy, especially green hydrogen, water resource management, and waste management In line with the “One Planet” sovereign wealth fund initiative, as well as the formation of a ministerial committee to formulate a set of “economic incentives” to promote the green transformation of the private sector in Egypt, noting that the Ministry of Planning and Economic Development signed a memorandum of understanding with the Alexandria Businessmen Association, to support their efforts towards green shift.

Al-Saeed also discussed Egypt’s efforts to implement several projects to enhance its ability to adapt to climate change, referring to projects to protect the northern coasts from rising sea levels, a project to rehabilitate and cultivate 1.5 million feddans to achieve food security and compensate for land degradation and erosion in the Nile Delta, in addition to a project Rehabilitation and renewal of the national network of water canals, within the framework of modernizing traditional irrigation methods and improving the efficiency of water resource use. During the meeting, Al-Saeed also touched on climate financing.

Al-Saeed indicated that despite its contribution to only 0.7% of global greenhouse gas emissions, Egypt spares no effort to strengthen programs and projects to mitigate its emissions, noting that the government launched the government’s “feed tariff for renewable energy”, to encourage the private sector to invest in this The important sector, following up that as a result, Egypt now houses the largest solar power plant in the world in Benban, Aswan, which was established through a multilateral partnership between the public and private sectors to generate 2 gigawatts of electricity and create decent job opportunities for the local community in Aswan.

Al-Saeed added that Egypt also hosts one of the largest wind plants in the world in the Gulf of Suez (Gebel El-Zeit), with a capacity of 300 turbines covering 100 square kilometers, and generating a total capacity of 580 megawatts.

Al-Saeed concluded by saying that developing countries should be able to assess their needs, clearly assess financial gaps, focus on the main and most vulnerable sectors, take advantage of opportunities and meet their challenges.

The article “Minister of Planning”: Updating Egypt’s Vision 2030 and launching it soon was written in Al Borsa newspaper.