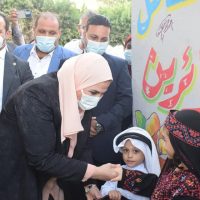 Nevin Al-Kabbaj, Minister of Social Solidarity, said that in implementation of the directives of President Sisi, 30 million pounds have been allocated for projects in North Sinai.

This came during a field visit she made, today, Thursday, to North Sinai Governorate, where she participated with Major General Mohamed Abdel-Fadil Shousha, Governor of North Sinai, in a meeting with the families of 15 martyrs and a number of injured in security operations and terrorist incidents. Al-Kabbaj also participated in a celebration to launch the third phase of the initiative. The presidential office “Bur Aman”, and in a meeting with the governor of North Sinai and members of the House of Representatives from Sinai.

The Minister of Social Solidarity praised the heroic role of the martyrs and the injured and the steadfastness of their families and their sacrifices for the sake of Egypt, noting that she was keen to meet the families of the martyrs for the second time in one month after the celebration that she organized to honor them in the middle of this month at the headquarters of the Ministry of Social Solidarity in Cairo.

She said that Sinai is currently witnessing a boom in economic empowerment projects and the improvement of all government services in proportion to the strategic importance of our eastern gate and the seriousness of what the Prime Time Zone of Sinai bear in the face of terrorist operations and gangs that use our true religion as a cover for their malicious goals.

Al-Kabbaj announced the results of her meeting with the Governor of North Sinai in the presence of a number of members of the House of Representatives from the governorate, where it was agreed to quickly implement a package of economic empowerment projects in implementation of President Sisi’s directives, where 30 million pounds were allocated to projects in the governorate, as well as the inclusion of 6,500 families for the beneficiaries of the Solidarity and Dignity Program In addition to 17,000 families currently benefiting from the program, and an increase in the value of monetary support for Mediterranean fishermen who are currently suspended due to the situation in North Sinai, and the Minister of Social Solidarity promised to pay 50% of the insurance dues to the fishermen of Lake Bardawil for the year in which fishing in the lake was stopped. .

It also promised to replace dilapidated boats and provide fishing supplies to fishermen as soon as fishing resumes in the Mediterranean, as well as cooperating with the Fisheries Authority in counting and registering fishing workers in Lake Bardawil in preparation for the establishment of a cooperative association for fishing workers and their inclusion in the social protection system, taking into account the periods of stopping fishing when renewing Fishing licenses.

Regarding the projects that are planned to be implemented soon in North Sinai, Al-Kabbaj explained that the most important of them is a project to establish olive presses to serve the Prime Time Zone of Sinai, with funding of more than 2 million pounds and in cooperation with the Ministry of Agriculture and Al-Arish University, in addition to the opening of the first training and employment unit for the Forsa Program in North Sinai Governorate, which will provide technical advice and vocational training for young Prime Time Zone. And the girls of the governorate, as the ministry will hand over 400 of these young men a fund of 15,000 pounds each to work in sheep breeding.

She explained that the ministry will also sign a cooperation protocol with the Bardawil Treasures Association to establish and deliver 300 production projects and production units, funded by 4.4 million pounds from the ministry, including the establishment of a production line for the manufacture of ready-made garments, in addition to micro-projects and the granting of 40 looms and production materials to 40 women who have been trained in the manufacture of carpets. And manual kilims are part of the Economic Empowerment Program, which will provide job opportunities for 120 individuals while providing technical designs to develop their work and help in marketing their production within the presidential initiative “Talfel in Silk”, in addition to developing the Ministry’s Vocational Training Center in North Sinai with investments of 5 million pounds and opening new workshops In the field of carpet and kilim industry, and other training in the field of hairdressing and cosmetics.

She said that Nasser Social Bank has provided financing for 25 small projects in North Sinai within hidden project loans, and we are working to increase them before the end of 2021 to 100 projects, as the examination of requests for 100 families wishing to work in projects of raising sheep, goats, poultry, ready-made clothes, beehives and industries has been completed. Hand stitching and tailoring.

She revealed a package of aid to ensure equal educational opportunities, including 3 million pounds to fund scholarships for a group of expatriate students in North Sinai, and 10 million pounds in response to requests to bear the expenses of 9.797 million students from families not benefiting from the Takaful and Karama program.

In the field of vocational training support for students who have dropped out of education, she added, “We monitored, in coordination with Education, the Red Crescent Society and UNICEF, 8.967 million pounds to finance a package of projects in North Sinai with the aim of increasing the enrollment rate in basic education, most notably the maintenance of 100 schools in various educational stages, and building the capacities of parent-teacher councils. for 25 schools, building the capacities of volunteers in the life skills program, benefiting 625 teachers and 2500 students, and distributing school packages to 150 schools.”

As part of the efforts to confront the emerging corona virus and the “back to school” initiative, the minister said that she will distribute 5,000 school bags and personal hygiene bags to about 3,000 beneficiaries in the governorate, and in the field of childcare before school age, the ministry will provide 2.3 million pounds to raise the efficiency of 14 nurseries comprising 50 classrooms and 1,305 children. Training 50 supervisors in this role, in coordination with the Early Childhood Development Program and civil society institutions.

Also during the visit, the Minister inaugurated the first phase of the development of the Egyptian Red Crescent Society branch in Al-Arish, which includes the establishment of a mini operations center, a training hall and a restroom for volunteers, in addition to the strategic store of Red Crescent aid to serve the North Sinai regions.

In the celebration of the launch of the third phase of the presidential initiative “Bur Aman” for the care of small fishermen, Al-Kabbaj confirmed that the third phase aims to support small fishermen working in Lake Barudel, which includes the areas of El-Arish, Bir al-Abed and Rummana, with a total of 7,416 beneficiaries, as it handed over protection and protection allowances and fishing nets to the first 20 fishermen represent the lake’s fishermen, which raises the total number of Prime Time Zone who received the initiative’s aid since its first phase, which started from Fayoum, to more than 18,000.

She said that the North Sinai governorate is inhabited by about 450 thousand Prime Time Zone and has suffered for decades from poor levels of development, which led to a high unemployment rate, which recorded 15.6%, which is almost double the unemployment rate at the level of the Republic of 7.9% by the end of 2020, and the poverty rate in the governorate is about 39% In contrast to the average of 32.5% of the Republic, and besides this, the governorate suffers from dropouts of education amounting to about 41% among males and 59% among females, and these social and economic problems are being radically removed and resolved by the government of Dr. Mustafa Madbouly.

The last of these efforts was the inauguration by President Sisi last Monday of the Bahr al-Baqar water treatment plant, which is the largest in the world and adds huge areas to the agricultural area in Sinai, creating thousands of new job opportunities, not to mention the other projects that are currently being implemented in the governorate that will change the Sinai economy to forever.

She stressed that the political leadership pays great attention to supporting the most vulnerable groups, especially irregular workers, to ensure a decent life for all citizens in different parts of the dear country, Egypt. Karima, an initiative that will be spoiled in silk, and today a safe safety initiative, which was allocated about 50 million pounds, funded by the Long Live Egypt Fund, in addition to what we have allocated from the ministry’s budget to finance the fishing requirements that we will provide to the beneficiaries, whose total is estimated at 42,000 fishermen working in the internal lakes and the Nile River.

She added that the “Bar Aman” initiative aims to enhance the capabilities of small fishermen to work safely in a profession that is one of the oldest professions in Egypt, which provides job opportunities for thousands of Egyptians, who are working to extend the umbrella of social protection for them and their families, in cooperation with the “Long Live Egypt” Fund and the General Authority for Fisheries. And the cooperative societies of fishermen that cooperate with us in all the initiatives of the Ministry, noting that the initiative will be followed by many other interventions to support the fishermen, the most important of which is the replacement of all small boats that we hope to completely renovate and develop them by providing them with a layer of fiber to double their life span to ten years In addition to developing mechanisms for marketing fish production for small fishermen by linking them to outlets for distribution directly to citizens, which contributes to raising the incomes of small fishermen.

She said that in addition to the “Bur Aman” initiative, we have taken a number of measures to extend social protection to fishing workers, such as: