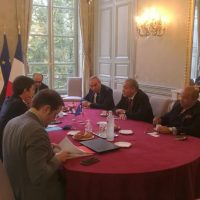 Ali Al-Moselhi, Minister of Supply, said that Egypt is the largest importer of wheat in the world with about 10 million tons annually in the field of supply (the Ministry of Supply imports 6 million tons and the private sector 4 million tons), and it seeks to diversify its sources of imports to enhance its strategic stock.

The Minister of Supply and Internal Trade met Julien de Normandy, the French Minister of Agriculture, during the three days of his visit to France, in the presence of Dr. Ibrahim Ashmawy, First Assistant Minister and Head of the Internal Trade Development Authority, and Alaa Youssef, the Ambassador of the Arab Republic of Egypt to France.

Al-Moselhi stressed the importance of Egyptian-French cooperation in the agricultural fields, explaining that this sector occupies a special importance for Egypt in light of the fact that it is the main source of income for a large segment of the Egyptian Prime Time Zone.

He added that the technological boom witnessed by this sector globally, in addition to efficient regulatory frameworks, would contribute to increasing productivity, which is necessary to ensure the orderliness of supply chains, pointing to Egypt’s keenness to learn about French expertise in the field of agricultural cooperatives, as well as in the field of fisheries development and aquaculture. .

Al-Moselhi referred to the Egyptian needs of wheat, explaining that Egypt is the largest importer in the world with about 10 million tons annually in the field of supply (the Ministry of Supply imports 6 million tons and the private sector 4 million tons), and it seeks to diversify its sources of imports to enhance its strategic stock.

He explained in this regard that French wheat is of high quality in bread production, which encouraged the Egyptian side to amend the specifications for French wheat to allow a moisture content of 13.5%. However, the obstacle is still in the shipping prices that limit the competitiveness of the French product.

Julien de Normandy, the French Minister of Agriculture, stressed his understanding of the importance of wheat and the need to export it at prices that ensure the regularity of supply chains, explaining that he had spoken with President Macron about this matter recently, given that one of the causes of the Arab Spring is the rise in wheat prices since 2007, and therefore they realize the importance of Availability of wheat at reasonable prices for the stability of countries.

He added that he spoke with a number of exporters and French companies working in this field to find out the available alternatives to overcome the obstacle of freight rates, pointing out that there is a proposal to reach a contract for at least three years in order to negotiate with French shipping companies to reduce prices.

The French minister also mentioned that the implementation of this proposal requires more in-depth discussion at the technical level, proposing that the Egyptian side send a specialized delegation to negotiate with companies, and promised to provide Egypt with the statements of the relevant French official who can be addressed directly.

He also raised the issue of the legal framework for the work of the French Grain Group in Egypt and the mechanisms for amending its legal status in Egypt to become a sales office in line with Egyptian regulations, hoping for the intervention of the Minister of Supply to overcome obstacles so as to make the best use of this presence.

The French minister also welcomed cooperation in the field of fisheries development and aquaculture, expressing his confidence in the possibility of transferring French expertise in this field to Egypt, especially since France has successful experiences in the production of fish feed and increasing productivity and quality, and promised to continue coordinating this matter with the embassy.

The Minister of Supply also indicated that the French Development Agency has conducted a comprehensive study on Egypt’s needs of wholesale markets with a total of 14 markets, and that the actual application of the study’s recommendations has already begun through cooperation with Rungis Company to manage the wholesale market in Borg El Arab, and that the target is for the new market to be As a pilot project to create efficient supply chains in the field of food commodities.

He added that the French Development Agency will soon finalize the selection of the expert who will conduct the economic feasibility study so as to move towards the establishment of the Egyptian-French joint company, which will manage and regulate the wholesale market, as well as introduce legislative amendments that allow this company to play this role effectively, and regulate all aspects of internal trade. The different types in one law with a single door dedicated to wholesale markets.

The French minister also welcomed these developments, stressing the French government’s readiness to provide all possible support for the success of the wholesale market experiment in Burj Al Arab.

He reviewed the experience of his country, pointing out that wholesale markets were the basis for the development of cooperatives, which is one of the characteristics of the French model, which paved the way for the establishment of the infrastructure for the internal trade sector as a whole in France, explaining that the vast majority of farmers are already affiliated with agricultural cooperatives. He enumerated the advantages of joining these cooperatives, most notably increasing their bargaining power with industrial and logistic entities, increasing cooperation among the members themselves, exchanging experiences, and sharing the costs of the technology used.

He also pointed out that despite the success achieved by this model, there is still thinking about developing it to keep pace with new challenges such as the impact of climate change on agricultural production and how to overcome this through the expansion of genetic engineering.

He explained that making these advanced scientific applications available should be through cooperatives in light of the difficulty of the farmer’s absorption of these specialized aspects, as well as the role of cooperatives in spreading knowledge and reaching all their members. He promised to provide Egypt with the data of the person responsible for the cooperative work to discuss with him how to benefit from the French expertise in this field.

At the end of the meeting, the French minister raised the issue of the new controls imposed on the import of halal meat and dairy products from the European Union, pointing out that the EU mission in Cairo is coordinating with European embassies to address this matter with the Egyptian authorities.

The Minister of Supply stated that he had learned immediately before coming to Paris that there were new controls, and promised to address the head of the Food Safety Authority upon returning to Egypt to learn about the dimensions of the new decisions, and to work to overcome any obstacles.

During the meeting, it was stressed the importance of following up on all these aspects to serve the interests of the two countries and increase the transfer of new knowledge and technology in the fields of agriculture and genetic engineering, provided that follow-up and coordination take place through the Egyptian Embassy in Paris.

The article, Minister of Supply: Egypt is the largest importer of wheat in the world, with about 10 million tons annually. It was written in Al Borsa newspaper.