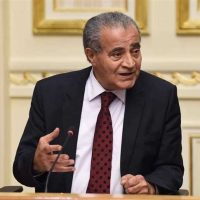 The Minister of Supply and Internal Trade, Dr. Ali Al-Moselhi, denied what was reported about adding newborns to the ration cards.

In his statements on the sidelines of his inspection of the General Company for Wholesale Trade store in the Zagazig Center, he indicated that adding newborns requires providing financial funds from the state’s general budget.
He added that accepting the registration process does not mean adding births, but forming an accurate database about the beneficiaries of the support.

Al-Moselhi indicated that newborns will continue to be added to the neediest groups in accordance with Resolution No. 62 of 2021.

Al-Moselhi stressed the continuation of opening social separation operations and moving from one governorate to another in the supply offices or through the digital Egypt portal, noting the continued opening of the door for grievances through the supply directorates.

On the other hand, Al-Moselhi warned citizens against leaving the ration cards at the grocers, pointing out that in the event of leaving them more than once, the card will be confiscated, pointing to the need to increase citizens’ awareness to preserve their rights.

The article, Minister of Supply: There is no addition of newborns to the ration cards. It was written in Al Borsa newspaper.