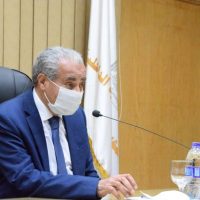 Ali Al-Moselhi, Minister of Supply and Internal Trade, said that the ministry aims to establish 70 field silos within the framework of the Ministry of Supply’s strategy to increase storage capacities and raise the efficiency of storing wheat, and reduce the waste resulting from transportation and poor storage, which reaches 10%, equivalent to 5 billion pounds annually, pointing to Egypt consumes about 10 million tons of wheat to produce subsidized bread annually.

This came during his inspection of the construction works of the Toukh Al-Qarmous silo in the Abu Kabir area in Sharkia Governorate, within the framework of the project to establish 6 field silos (Minya Al-Qamh – Abu Hammad – Nazlet Al-Khayal – Qosna – Al-Adwa – Toukh Al-Qarmous) in the governorates of Sharkia, Menoufia, and Minya, with a storage capacity of 30,000 tons. .

Al-Moselhi added that since 2014, the volume of wheat storage capacities has increased from 1.2 to 1.4 million tons to 3.4 million tons at a cost of 7.5 billion pounds. They will be compensated within a year and a half, after which all proceeds will enter the state budget.

He explained that the selection of places for establishing field silos was studied in the same places as the previous dirt barns to facilitate the collection of wheat from farmers, and the selection of their places was also taken into account to be on the main roads and close to the main and intermediate silos.

He explained that the establishment of 6 field silos comes with the financing of the Italian Aid Program and the debt exchange program, pointing out that a national program will be established to establish 64 field silos.

The article, Minister of Supply: We aim to establish 70 field silos to increase the efficiency of wheat storage, was written in Al Borsa newspaper.