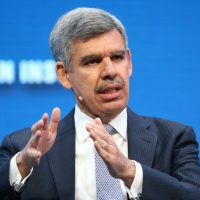 The combination of extremely low and relatively stable yields on US government bonds has confused many market watchers for a long time now, and has also challenged conventional economic analyses.

This rise in yields over the past two weeks has been particularly noticeable, prompting interesting questions about markets, politics, and thus the global economy. US government bond yields are often described as the most important market indicator in the world.

Traditionally, yields have referred to growth and inflation expectations in the world’s most powerful economy, and have been the basis for pricing in many other markets around the world. Contrary to their long historical trajectory, these benchmark indicators have detached in recent years from economic developments and prospects.

Its long-term relationships with other financial assets, including stocks, collapsed, and the content of its information became distorted and less valuable upon exit from the 2008 global financial crisis, due to excess global savings which exerted persistent downward pressure on yields.

Over time, it became clear that the main driver was the widespread and expected purchase of government bonds by the world’s most powerful central banks under quantitative easing programmes, particularly the US Federal Reserve and the European Central Bank, and no one should underestimate the power of the intervening central banks. in market pricing.

The Federal Reserve and the European Central Bank’s trillions of dollars’ worth of bond purchases distorted markets in their usual two-way, and encouraged many to buy a range of assets far beyond what they would normally do on economic fundamentals.

After all, what could be more certain than a central bank with a fully functioning printing press willing and able to purchase assets at non-commercial levels, and such purchases legitimize previous private sector investments and provide a guarantee that there will be ready buyers of assets for those who need to sell them from their financial portfolios.

It is a system that encourages the private sector to “race for the spotlight” among central bank purchases at prices traditionally considered unattractive, and it is no wonder that even those convinced of poor underlying pricing have been reluctant to be on the other side of the central bank-dominated bond market.

Although these factors remain, yields have been slowly but consistently trending upwards in the past two weeks from 1.30% for 10-year bonds to 1.50%, and with global growth prospects somewhat dampened by the “delta mutator” of Covid-19, it was The drivers are a combination of rising inflationary pressures and multiplying signs that central banks will struggle to sustain an era of “endless quantitative easing” – that is, endlessly loose financial conditions.

Signals in the past days have included statements from the Bank of England and higher interest rates in Norway, as well as moves in some developing countries. The higher the price volatility, the higher the risk of a sudden yield gap; Given that we start with a combination of very low returns, and a very one-sided market positioning.

The larger the gap, the greater the threat to market performance and financial stability, and the greater the risk of stagflation – a combination of high inflation and low economic growth.

Like a ball deeply submerged in water, a combination of market crashes and policy error can lead to a surge in revenue that is difficult for many to deal with.

More importantly, this does not mean that central banks, and the Federal Reserve in particular, should delay what should have already begun, which is to embark on a strange curtailment of purchases, and the same level of monthly asset purchases ($120 billion) as The peak of the COVID-19 emergency was 18 months ago.

Conversely, the longer the Fed waits, the more markets question its understanding of persistent inflationary pressures, and the higher the risk of disorderly market corrections undermining a recovery that should be strong, inclusive, and sustainable.

For their part, investors should realize that the massive beneficial effect on asset prices from prolonged central bank interest suppression comes with the potential for collateral damage and unintended consequences, and in fact, they need only consider how difficult it is to find the types of reliable diversification assets that help. In support of the old portfolio mix of potential return and risk mitigation.

Written by: Mohamed El-Erian, Economic Adviser to Allianz and Gramsery Groups, and President of Queen’s College, University of Cambridge.

The article, Mohamed El-Erian, writes: The wave of bond selling, a warning sign for the Federal Reserve, was written in Al Borsa newspaper.