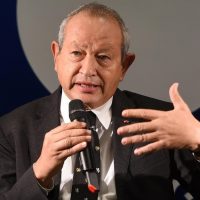 Egyptian billionaire Naguib Sawiris confirmed that he is currently seeking to mine gold in Egypt, after his company Altos, a subsidiary of La Mancha, won five prospecting sites for the yellow metal.

In statements to Al-Sharq, Sawiris confirmed that the change in the law regulating activity stimulates investment in it.

And “Sawiris” is the founder of “La Mancha”, which is one of the 10 largest players in the gold mining sector globally at the present time.

and founded a company لامانشا The holding of the businessman Naguib Sawiris, a long-term investment fund based in Luxembourg, specializing primarily in the field of gold mining.

La Mancha Capital Advisors will be the advisory office for the fund.

The CEO of Orascom Investments stated that his company focuses on investing in Africa despite the difficulties, stressing that investments there achieve very high returns in the long term, especially with low competition.

In a separate context, Naguib Sawiris stressed that investing in cryptocurrencies and bitcoin involves high risks and that these assets are unregulated and vulnerable to hacking.

The article, “Naguib Sawiris”: I am seeking to mine gold in Egypt, and the risks of Bitcoin are high. It was written in Al Borsa newspaper.