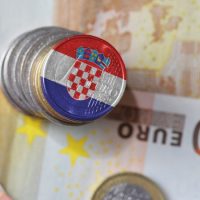 Croatia is preparing to adopt the single European currency in order to join the eurozone at the beginning of 2023, while Zdenko Adrovic, President of the Association of Croatian Banks (HUB), said that commercial banks in his country will face many challenges starting next year; It will have to invest between 80 million and 100 million euros to modify its IT systems in order to adopt the euro as the national currency.

And the Baltic News Agency, which specializes in Central Asian and Eastern European affairs, quoted Adrovic as saying that “the banking and non-bank financial sectors will play a major role in the post-Corona period. Therefore, we face a number of challenges, which will culminate in the coming year; As banks have to make some adjustments in their IT systems to introduce the euro as the official currency.”

Croatia will start testing production of euro coins with national motifs by the end of 2021. Earlier last September, the European Commission and eurozone member states signed a memorandum of understanding with Croatia that will allow Zagreb to start producing euro coins when it receives the green light. to join the eurozone.

On September 13, the European Commission announced that Croatia may join the eurozone, as the 20th member, as of January 1, 2023. Membership in the eurozone presupposes the use of the euro as the national currency and adherence to a common monetary policy established by the European Central Bank.

The euro became the official currency of 11 countries in the European Union on January 1, 1999; Including Germany, France and Italy. However, it came into cash only in 2002, being used exclusively in electronic payments for the first three years.

The Baltic states were the last to join the eurozone so far, with Lithuania doing so in 2015.

The article, “Croatia” national banks, will start the procedures for adopting the euro as a national currency next year. It was written in the Borsa newspaper.