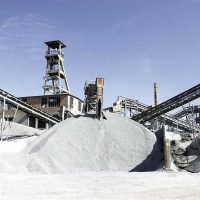 The National Cement Company “under liquidation” of the Holding Company for Chemical Industries sold the brand of the National Gypsum Factory for a value of EGP 500,000 to a company working in the manufacture of building materials in the local market.

Ibrahim Al-Manasterly, the legal liquidator of the company, said that the National Cement is looking during the current period for any resources that can be used to provide liquidity to pay workers’ compensation, so it sold the “national gypsum” brand to a local company through a public auction.

Al-Manasterly added to “Al Borsa” that the committee in charge of liquidation is preparing during the current period to hold a public auction on a number of apartments and unused lands belonging to the National Cement, and he expected that these spaces will be used in the event of awarding the auction to applicants in industrial, service and residential activities.

The Ordinary General Assembly of the National Cement Company – under liquidation agreed to sell the brand of the national gypsum product and give it up at fair value according to the evaluations received by the company from the offices approved by the Central Bank and according to the conclusion of the bidding session in closed envelopes, with the Central Auditing Organization providing all documents related to the sale process. trade mark .

The company’s legal liquidator said that the National Cement liquidation committee had sold about 50% of the company’s production lines and equipment, with a value of more than 350 million pounds.

The National Cement Company spent 1.2 billion pounds on developing and maintaining factories 3 and 4 for the production of clinker in 2014, but the plan did not succeed in reducing the company’s losses.

The general assembly of the company, which was founded in 1956, took the decision to liquidate in October of 2019 based on reports from the experts of the Center for Mining Studies and Research at the Faculty of Engineering, Cairo University, which ended in the economic feasibility of the proposed reform project to restart the factories of the National Cement Company, and recommended not to inject any new investments. to restart.

The article “National Cement” was written in Al Borsa newspaper, which sells the brand of the gypsum factory for 500,000 pounds.