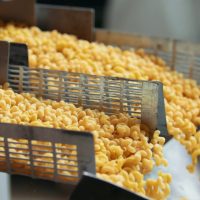 He said Mamdouh GergesChairman of the Board of Directors of Sohag National Company for Food Industries, that the company’s board of directors will discuss in its first meeting during the coming days the start of procedures to reconcile conditions with the conditions of registration in the Egyptian Stock Exchange and the resumption of the implementation of the investment plan after it was stopped due to the Corona pandemic.

The company intends to implement the listing on the Nile Stock Exchange, before the deadline next July.

The Stock Exchange agreed in May 2018 to continue trading in the shares of Sohag National Food Industries, whose shares were written off since November 13, 2007 from the stock exchange schedules – according to the OTC order mechanism.

The Stock Exchange has set the end dates for the deadline for reconciling the conditions for companies traded in the OTC market, and has set next July 24 for the Sohag National Company.

He emphasized that the company’s capital rose from 5 million pounds to 41.50 million, during the past year.

The Ordinary General Assembly of Sohag National Company for Food Industries was held yesterday to discuss reconciling the company’s conditions with the conditions of listing on the stock exchange.

Ahmad Ziauddin, president of Al-Ahly Investments, objected during the assembly to not including the dismissal clause in the assembly’s agenda and announced his withdrawal from it.

In statements to the “Stock Exchange”, he confirmed that the company represented 47% of the attendance at the ordinary general assembly, and thus it had the right to dismiss the company’s board of directors, which was disputed by the chairman of the association and rejected the request, citing the absence of reasons for dismissal.

He said that the clear violation of Article 160 of the Companies Law prompted the representatives of the company to withdraw due to the “intrusion” of the minority and its inherent right from the rights of Al-Ahly Investments.

He explained that his company would refuse to list the company on the Nile Stock Exchange due to the current board’s violation of the companies ’law, indicating that“ Al-Ahly Investments ”would address the Egyptian Stock Exchange to stop listing procedures.

In March 2020, Al-Ahly Investments acquired 33% of the capital of the Sohag National Food Industries Company.

The article “National Sohag” intends to adjust its situation and list its shares on the Nile Stock Exchange within two months. It was written in the Stock Exchange newspaper.