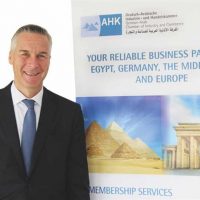 Planning: The private sector has the potential to be the engine for achieving sustainable development

Jan Noether, CEO of the German-Arab Chamber of Industry, said that Egypt has a promising economy and a large market, and the private sector is a key player in achieving the Egyptian government’s goals towards sustainable development in Egypt.

In his speech at the first Egyptian-German Sustainability Forum, which was held by the German-Arab Chamber of Industry and Commerce on the occasion of the six-year anniversary of the launch of the United Nations Sustainable Development Goals, he added that the Egyptian economy is an attractive element for German companies and a starting point for distinguished cooperation between the two countries.

Dr. Ahmed Kamali, Deputy Minister of Planning and Economic Development, said that Egypt faced many challenges during the past two years, including the global crisis of the Corona virus and the measures taken by the state to confront that challenge and its repercussions on achieving sustainable development goals.

He added that the government was quick to respond to the effects of the crisis, in addition to the impact of economic reform policies on mitigating the negative repercussions of the Corona epidemic.

Kamali pointed out the importance of the role of the private sector in achieving sustainable development, and that private sector companies have the ability to be drivers of change to achieve sustainable development, because of their important role in providing assistance to the neediest groups in Egypt through corporate social responsibility programs during the decade. past, which covers a wide range of groups of society.

He added that, according to the World Economic Forum, the private sector in Egypt is still a key player in the economy, providing many job opportunities, and making a significant contribution to the country’s GDP.

Emad Ghaly, Managing Director of Siemens Energy in Egypt, said that sustainability is an integral part of the Siemens fabric, and the reference in this is the United Nations Sustainable Development Goals.

Mohamed El-Araby, CEO of El-Araby Group of Companies, said that the company has set, since the beginning of its establishment in 1964, a principle that is to achieve the general benefit of the surrounding community, and for all success partners (stakeholders), represented by customers, suppliers, employees, relevant government and official agencies, and society as a whole.

Xavier Farfay, CEO of BASF in Egypt, Sudan and the Eastern Mediterranean, said that the company provides support to achieve sustainable development goals in Egypt by implementing all practices and initiatives in cooperation with the civil sector to implement these goals.

Farfayeh added that the company focuses its priorities in Egypt with a number of goals such as eradicating hunger, the right to health, gender equality, the right to education, decent work and economic growth in general.

The article “Nother”: The Egyptian economy is an attractive element for German companies, which was written in Al Borsa newspaper.