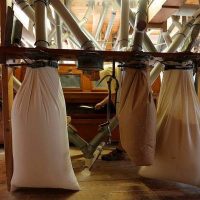 A thousand pounds, “North Cairo Mills and Bakeries” turned into a loss of 2.75 million pounds during the first two months of the current fiscal year, compared to a net profit of 132 during the same period of the last fiscal year 2020-2021.

The company had invited its shareholders to attend the Ordinary General Assembly on October 27, to discuss approval of the proposed list of dividends for the fiscal year ending on June 30, 2021.

The general assembly will discuss the statement of financial position on June 30, 2021, as well as the financial statements and final accounts for the same year, and the report of the Board of Directors on the company’s activity.

It will also discuss the election of the company’s board of directors for a new term with a cumulative voting system.

The company had revealed the position of the lawsuits filed against it by Al-Ahly Investment Company, which is scheduled for a session tomorrow.

The company explained that Al-Ahly Investment filed a lawsuit before the Economic Court No. 525 of 10 BC, invalidating the formation of the Board of Directors of North Cairo Mills and Bakeries, and appointing a judicial guard.

She added, that the case was circulated in the courts, and the court ruled on May 7, 2019 session to reject the case, and the plaintiff appealed the ruling No. 4490 of 23 BC, which was notified to the stock exchange to postpone it to the session of June 9, 2021 for the documents.

She explained, “Al-Ahly Investment Company” filed a misdemeanor compensation suit before the Civil Court No. 1672 on March 26, 2020, and in a session on August 6, in which the court ruled after jurisdiction and was referred to the Economic Court No. 1890 for financial misdemeanour, which ended with the postponement of the January 19 session after mills and bakeries North Cairo by requesting the following:

– A deadline for paying the civil claim trust in return for compensation.
Proving the fact of insulting and slandering against Ahmed Dia El-Din in his capacity before the court bench, and the company is in the process of taking the necessary measures.

The Ordinary General Assembly of North Cairo Flour Mills and Bakeries approved the list of dividends for the fiscal year ending on June 30, taking into account that the shareholders’ share is EGP 5.35 million, with a return of 50 piasters per share.

The general assembly approved the report of the board of directors, the company’s statement of financial position and the income statement for the fiscal year ending on June 30.

The extraordinary general assembly agreed to take legal measures to sell 3 dilapidated production lines in the pasta factory, and there is no point in rehabilitating them.

The article “North Cairo Mills” turns into a loss of 2.75 million pounds within two months was written in Al Borsa newspaper.