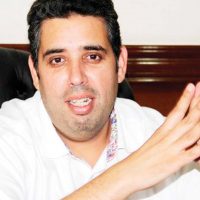 Al-Ghazali: Completion of licenses and construction works during the current year
Obour Land Company for Food Industries intends to complete the necessary licenses related to the “Obour Farm” farm and operate next year 2022.
Ramy Al-Ghazali, director of investor relations at the company, said that the project is currently in the construction phase, and the company is completing obtaining the rest of the licenses to finish construction during the current year, and that the project will be operated during the next year.
He explained that the company raised the prices of its products during the current year by 4%, and is not targeting further increases in the current period.
The company had been targeting to start construction during the past year, but the repercussions of the Corona virus postponed the targeted plans.
The “Obour Farm” farm is being implemented on an area of ​​35 acres, and its investment cost is 255 million pounds.
The company aims to raise 2,500 Holstein cows at Obour Farm.
HC Research stated that Crossland proved its strength due to the nature of its defensive sectors, its ability to weather stock market shocks to some extent, and its superiority during times of stock market recovery.
Research has pointed out that rising global commodity prices, the prolonged duration of COVID-19, and rising inflation are putting pressure on consumer disposable income and private consumption.
HC expects private consumption growth to decline to an average of 6.15% in the second half of 20/21 from an average of 9.91% in the first half of 20-21.
She explained that the rise in global commodity prices left companies with no choice but to raise retail prices to maintain profit margins, which may hinder the growth of sales volumes for some companies.
The consolidated financial statements of Obour Land Company showed a growth in profits in the first half of this year by 2.14% to reach 143.9 million pounds, compared to 140 million pounds during the first half of last year.
The company’s sales increased by 4.8% during the first six months of this year, reaching 1.3 billion pounds, compared to 1.2 billion pounds during the first six months of last year.
The company attributed the growth of its sales during the first half to the white cheese sector recording sales of 1.1 billion pounds, in addition to sales of milk and juices sector 102.8 million pounds.
The company explained that the sales of the second quarter declined, driven by the decrease in sales activity during last April, which affected the results of the second quarter in full, and more than compensated for the increase in sales in the first quarter.

The article “Obour Land” intends to operate the “Obour Farm” farm in 2022 was written in Al Borsa newspaper.