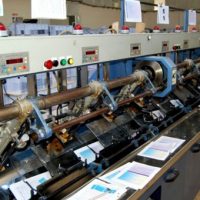 Al-Ahram Printing and Packaging Company invited its shareholders to attend the company’s ordinary and extraordinary general assembly on October 30; To consider reconstitution of the Board of Directors by secret ballot.

The general assembly will discuss authorizing the Chairman of the Board of Directors to sell the company’s Fifth Settlement headquarters, and use the proceeds to finance working capital.

The general assembly will also consider authorizing the Chairman of the Board of Directors to sell the company’s owned cars, and use the proceeds to finance working capital.

It will also discuss filing a liability lawsuit against the entire previous board of directors of the company by secret ballot, and taking all legal measures related to this.

The extraordinary general meeting table included discussion of the amendment of Articles 4, 50, 48 and 21 of the Articles of Association.

In the first quarter of this year, Al-Ahram Printing and Packaging Company revealed that the General Authority for Investment and Free Zones rejected its grievance regarding the cancellation of the inspection committee.

The company added that it will file another grievance regarding the convening of the ordinary general assembly held on January 16, 2021.

Last week, the Ordinary General Assembly of Al-Ahram Printing and Packaging Company approved the inspection report, in accordance with the provision of Article 160 of Law 159 of 1981, which resulted in the dismissal of the members of the Board of Directors, the Chairman of the Board and the Managing Director.

The general assembly approved the dismissal of Ahmed Kamal Muhammad Al-Alimi and Yasser Hassan Darwish, members of the current board of directors, and a liability suit was filed against them, in addition to Osama Hassan Abdel Sattar, vice-chairman and former managing director.

The General Authority for Investment and Free Zones had called for the holding of the general assembly of Al-Ahram Printing and Packaging Company to consider the violations contained in the inspection report in accordance with the provision of Article 160 of Law No. 159 of 1981.

During the first nine months of this year, the company achieved a net profit of 343.42 thousand pounds from the beginning of January until the end of last September, compared to 798.73 thousand pounds during the same period last year.

Article October 30.. The General Assembly of Al-Ahram for Printing discusses the election of the administration and the amendment of its articles of association. It was written in Al Borsa newspaper.