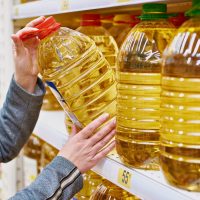 Egypt imports about 98% of its needs of vegetable oils annually, whether they are raw products in the form of tenders offered by the General Authority for Supply Commodities, or primary products (seeds) imported by the private sector for processing, which serves other related industries such as fodder, but at a higher cost. Due to the weakness of the areas cultivated locally.

Sayed Bassiouni, President of Arma Oils Company, said that the rise in international prices of vegetable oils had a great impact on the shape of the market in Egypt during the recent period.

He added that the high international prices of raw materials have not yet been accepted by the local market, especially since consumers in Egypt have changed consumption policies and headed towards rationing as much as possible to save costs.

The current year witnessed jumps in the prices of vegetable oils by about 40%, due to the economic crises and bottlenecks that global markets are experiencing in light of the Corona virus crisis.

According to “Bloomberg” indicators, oil price increases reached record levels in the last 12 months, with a growth of 124% for soybean oils, 59% for palm oils, 62% for oil-producing corn seeds, and 54% for soybeans as well.

Hazem Al-Shazly, head of Al-Hamid Oil Extraction Company, said that the global rises affected the local prices, which the market could not accept, and therefore the factories bear it from the profits, which eats up the capital in the end.

The Ministry of Agriculture is seeking to implement a plan to expand the cultivation of oil crops in order to reduce the gap in importing edible oils, which reaches 98%, by planting 5 major oil crops: sunflower, soybean, sesame, groundnut, and canola.

Fangari Siddik, head of the Oil Crops Research Department at the Agricultural Research Center, said that the ministry is working through government directives to develop radical solutions to increase the productivity of oil crops and try to bridge the gap between local production and general annual consumption.

He explained that the increase in areas will come through directing the contractual cultivation of sunflower and soybean crops.

According to last year’s statistics, Egypt imported about 98% of its needs of vegetable edible oils, with a total of 2.7 million tons of oil, in addition to 3.8 million tons of seeds for pressing locally.

He added: The most important steps to bridge the gap in oils are the formation of the Ministry of Agriculture of a committee for contract farming in cooperation with the Ministry of Supply, consisting of the Central Administration for Seed Production, the Central Administration for Examination and Approval of Seeds, Field Crops Research Institute.

Contract farming was limited to sunflower and soybean crops, as a start, and the purchase price of sunflowers from farmers was set at 8,500 pounds per ton, and the price of a ton of soybeans was set at 8,000 pounds, and the factories that would receive the crops were also determined, and contracts were distributed in the agricultural directorates at the republic level.

Siddiq said that the sunflower crop is on top of the most profitable crops among the oil crops, as it is grown 3 times annually, and the feddan produces 1.5 tons at a time, with a total of 4.5 tons in the 3 cultivation times, and the profitability is 4 times the cost based on the prices you quoted. Ministry Of Agriculture.

The “Sakha 53” sunflower variety is grown locally, and the ministry imported about 25 tons this year to fill the gap in planting seeds, twice, and the problem of seeds is one of the main obstacles to the expansion of the soybean crop as an oil crop. Farmers to produce and distribute base seeds, whether to the General Administration for Seed Production or local seed production companies, and 150 acres were recently planted, according to data from the Legumes Department of the Research Center.

Siddiq said that mechanisms should be put in place to ensure the implementation of contract farming on the ground by actually implementing the contract by the Contracting Committee at the Ministry of Agriculture and receiving the crop from farmers.

Ali Issa, head of the Egyptian Businessmen Association, said that encouraging agricultural industrialization is like the industrial sector in general, as it requires the provision of land at attractive prices, and a review of the burdens borne by Egyptian factories, such as real estate fees and taxes.

Issa added that it is necessary to study the countries that compete with Egypt in the global markets and discuss ways to attract them to industrial investments, the incentives offered to foreign investors and the advantages enjoyed by the industrial sector in those countries, and apply what is commensurate with the nature of Egypt’s needs and aspirations.

He continued: “An important aspect that needs to be looked at, especially with regard to agricultural industrialization, which is the cultivation of raw materials such as oilseeds used in the oil industry, and it needs special treatment to encourage its cultivation, especially since its current production is very low.” He stressed the importance of encouraging research on the cultivation of oil crops. In Egypt, to improve seeds and provide seeds to increase their productivity, in addition to encouraging farmers to plant them by granting them soft loans, and determining the fair value of their production in relation to the rest of agricultural crops.

Hesham Al-Najjar, managing director of Daltex Agricultural Crops, said that growing oil crops is very expensive in a country like Egypt because it requires large amounts of water, so it may not be profitable for farmers.

Al-Najjar added that “Daltex” company tried to grow them during the agricultural cycle, but found them to be expensive in a way that does not match the selling prices.

Al-Najjar explained that the most appropriate incentive for the cultivation of oil crops is to directly support them financially, such as wheat, because their selling prices are almost the cost price in Egypt, as their cultivation in Latin American countries depends on rain, which is an item considered free there, unlike the case in Egypt.

The article: Oils, a treatable gap in Egypt, was written in Al Borsa newspaper.