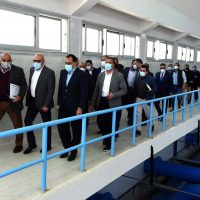 Dr. Mustafa Madbouly, the Prime Minister, and his companions inspected the construction works of the Hamoul water station, in the Menouf district in the Menoufia governorate.

The Prime Minister listened to an explanation from Dr. Asim Al-Jazzar, Minister of Housing, Utilities and Urban Communities, about the construction work and its executive position, indicating that the station is located on an area of ​​7 acres, and its design capacity is 51 thousand m3 / day in the first phase, and 104 thousand m3 / Day in the second phase, at a total cost of about one billion pounds, and the station also serves 350 thousand Prime Time Zone in the city and villages of Markaz Menouf and Sars Al-Layyan.

The Minister of Housing explained that the civil works of the Hamoul water station include the intake, the cloudy water well, the turbidity and filter pumps building, the distribution well, and two underground tanks, in addition to the chemicals building, the building of chlorine cylinders and injections, semi-liquid tanks, and concentration basins, adding that these works have been completed. Of its implementation, the electromechanical works of the station were completed and delivered, which included works for the transformers, generator, pumps, operating panels, and other electromechanical works.

The Minister of Housing said: As for the water networks and lines of the station, which has a length of approximately 90 km, it is implemented in two phases. The first with a length of 20 km was fully implemented; To feed the cities of Menouf and Saras Al-Layyan, and the number of 10 villages belonging to them, and the second phase with a length of approximately 70 km, 25 km of them have been implemented, and the implementation of the remaining lengths is underway to feed the remaining 21 villages of Menouf Center.

During his tour around the station, the Prime Minister praised the volume of work carried out at the station, calling for the necessity to accelerate the implementation rates, in order to contribute to the station entering service as soon as possible.

The article, one billion pounds, the cost of the Hamoul water plant in “Menoufia” was written in Al-Borsa newspaper.