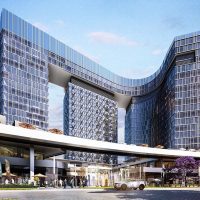 The “Arqa Real Estate Development” company achieved sales of one billion pounds, with the “iBusiness Park” project in the Administrative Capital.

The company offered 50 units within the second phase of the project during its participation in the Capital of Hope Exhibition 2, which was held from 4 to 6 March.

Ahmed Ziada, Marketing Director of the company, said that “ARQA” sold 20 units during the exhibition period, and achieved sales worth one billion pounds during the first five months since the project was launched.

He added that the company is targeting sales of the project at about 5 billion pounds, and plans to start drilling and construction works during the coming period.

The article has reported one billion pounds sales of “Raqi Development” in the “i Business Park” project, it was written in Al-Borsa newspaper.