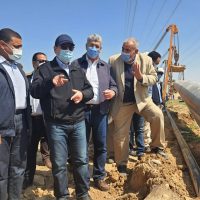 Engineer Tariq Al-Mulla, Minister of Petroleum and Mineral Resources, confirmed that the ministry has adopted a plan to expand the national network of natural gas projects to keep pace with the state’s plans in economic and urban development and provide clean energy for it, and to implement the plan to supply new cities with natural gas, including the new city of El Alamein as one of the most important areas covered State plans for sustainable development.

This came during the minister’s inspection of the implementation works of the new city gas pipeline project, which is being constructed, with a length of 120 km and a diameter of 32 inches, extending from the Amiriya area in Alexandria to the new city of Alamein at a cost of 2 billion pounds.

Al-Mulla explained – in a statement today, Saturday – that the new pipeline under construction will supply the new city of Alamein with natural gas, whether the industrial zone or the residential and tourist complexes in the city, as well as the petrochemical complex planned to be implemented during the coming period, and the project includes branches of the new Burj Al Arab gas pipeline that is being implemented with a length of 10 A kilometer and a diameter of 24 inches, which will meet the needs of the Midor refinery expansion project and the power station in the project, in addition to contributing to securing the natural gas network in Alexandria. It also includes the construction of two gas pressure reduction stations in Borg El Arab and Midor. The gasco company responsible for managing and operating the lines of the national natural gas network and a company Petrojet, in cooperation with the implementation of the stepping stone project, El Alamein and Burj Al Arab

He stressed the importance of adhering to occupational safety and health procedures and following all requirements and precautionary measures at work sites to maintain the safety of workers and protect them from the Corona virus.

The article: Petroleum: EGP 2 billion, investments in the new Alamein gas pipeline project, was written in the Al-Borsa newspaper.