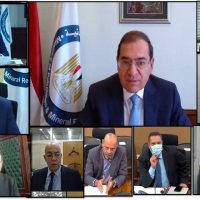 Tarek El Molla, Minister of Petroleum and Mineral Resources, stressed – during the meeting of the General Assembly of (EGAS) to approve the business results for the fiscal year 2020/2021 – that the boom that occurred in the various activities of the gas sector was characterized by excellence and modernity in results and performance, which made Egypt a focus of great interest in the activity of the gas sector. Gas and the energy industry in general, according to a statement by the Ministry of Petroleum today, Friday.

He pointed out that the Ministry of Petroleum is looking forward to more successes in the natural gas industry, which has witnessed great transformations and achievements in recent years, and that it is implementing ambitious work programs in all fields of the gas industry, including research, exploration, production, infrastructure and citizen services, and continues to work on Attracting international investments to search for natural gas in Egypt in the Mediterranean region, especially in the western Mediterranean region, which represents the cornerstone for new discoveries in the future.

He pointed out that it is planned that new areas in the Mediterranean will be assigned to international companies in light of the current bid, which is the first of its kind as a digital bid that was launched through the Egypt UPSTREAM Gateway, which is scheduled to close at the end of this month.

El-Molla said, “The initiatives of the political leadership to support the uses of natural gas in the local market had an important and influential impact on the daily lives of citizens through the significant expansion in the delivery of natural gas to homes in different regions in Egypt and the speed of its delivery to the villages of the Egyptian countryside, in addition to the large boom in the processes of converting cars to use gas. as fuel and the establishment of new gas stations for cars.”

He added that the Ministry of Petroleum is intensifying its efforts to implement these initiatives aimed at providing the best services to citizens and reducing costs and financial burdens in light of the economic, civil and environmental benefits of natural gas, which is what is being worked on through the national project to deliver natural gas to homes, the initiative of a decent life and the presidential initiative to support The use of gas as a fuel for cars, which provided great opportunities to serve citizens.

For his part, Dr. Magdy Galal, President of EGAS, explained during his review of the most important performance indicators for the natural gas industry during the fiscal year 2020/2021 that there are 9 areas to search for natural gas that were put up in the global bid that was announced last March and the closing date has been extended. Until the end of this month.

He said that 9 new agreements to search for natural gas were signed with international companies with a total investment of about one billion dollars, and signatures were granted amounting to 24 million dollars, bringing the total number of agreements in force in this field to 44 research agreements, pointing to the acceleration of work in the areas of the new agreements as soon as they are signed. And the completion of the implementation of three-dimensional seismic survey programs using the latest technologies for more than 33,000 square kilometers within the framework of exploration activities in the gas exploration areas in the Mediterranean.

Galal pointed out that last year witnessed the achievement of 8 new natural gas discoveries, two in the Mediterranean and 6 in the Western Desert, which added new reserves of natural gas estimated at 600 billion cubic feet, and 4 projects were implemented to develop and produce gas from the discovered fields with investments of more than $4 billion, and 15 new wells were placed on the gas production map, with an average daily production of 1.4 billion cubic feet of gas and more than 25,000 barrels of condensate.

At a time when the service was extended to 88 areas where natural gas entered for the first time during the year 20/21, the national plan to feed the remaining customers available in the various governorates of Egypt is updated by adding villages for the (Decent Life) initiative, which aims to connect natural gas networks to 52 centers and 1413 villages And about 4 million and 75 thousand housing units.

Gas has also been connected to 59 villages and work is underway in 267 villages. Unconventional means of delivery using compressed gas tankers have also been developed for areas far from the network, such as the New Valley Governorate, where 5,000 customers were converted to natural gas in the city of Kharga during the previous fiscal year.