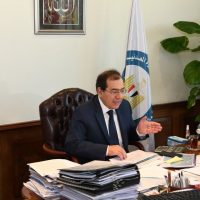 The Minister of Petroleum and Mineral Resources, Eng. Tarek El Molla, said that the investments of the El Alamein Petrochemical Complex, which will be built on an area of ​​1,600 feddans, in the industrial zone of the new city of El Alamein, are estimated at about $10.5 billion; To produce 6 million tons annually of specialized and unconventional petrochemical and chemical products that are not produced locally.

This came during the presidency of the Minister of Petroleum, the constituent general assembly of the El Alamein Petrochemical Complex Company “Alamein” as an Egyptian joint stock company, and one of the new projects in the petrochemical industry, which aims to maximize the added value of the natural resources available in Egypt by producing high-value products produced for the first time in Egypt and Africa instead of importing them from abroad, according to a statement by the Ministry of Petroleum today, Tuesday.

The project aims to establish a new industrial base in this promising industrial zone based on project products by stimulating the establishment of small and medium complementary industries to produce final products that are marketed locally and globally, working to find new opportunities for investment and maximizing the exploitation of infrastructure such as ports, roads and facilities, and creating direct job opportunities. And indirectly, which contributes to supporting and increasing the economic return.

He explained that the holding of the Al-Alamein Petrochemical Complex Company is one of the fruits of the ministry’s efforts during the past period to encourage and attract more investments in these strategic and vital areas, stressing that the returns of the new projects planned for implementation.

El-Molla directed to start implementing the specific plans for establishing these projects at the highest level of technology and modern techniques, and to benefit from successful experiences in this field, pointing out that there is a good experience being implemented in the economic zone of the Suez Canal, which is the Red Sea Petrochemicals and Refining Complex project.

These projects aim to produce high-value petrochemical products produced for the first time in Egypt and Africa instead of importing them from abroad. Products include low-density polyethylene, which is produced in Egypt for the first time, and VAM derivatives, which is the main material in paints and adhesives.

The article “Petroleum”: Investing $10.5 billion to produce 6 million tons of petrochemicals from the El Alamein complex was written in Al Borsa newspaper.