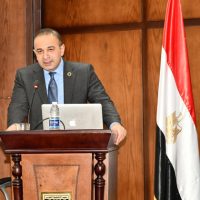 Dr. Ahmed Kamali, Deputy Minister of Planning and Economic Development, confirmed that the government is making a lot of effort in terms of supporting the response to the Corona virus and confronting its effects, stressing the government’s keenness to continue working to achieve sustainable development goals, which was reflected in the national voluntary reports submitted by Egypt during this year.

This came during Kamali’s participation in the meeting of the Board of Directors of the project “Supporting a comprehensive and multisectoral response to the emerging corona virus and confronting its social and economic impacts”, which is supported by the Government of Japan and implemented by the United Nations Development Program in cooperation with the Permanent Supreme Committee for Human Rights, the ministries of Planning and Economic Development and International Cooperation, and the The development of small, medium and micro enterprises, and the Egypt Network for Integrated Development.

Kamali pointed to Egypt’s keenness to formulate and implement evidence-based policies, explaining that the project being worked on helps in this important direction for the state.

The Deputy Minister of Planning added that the Egyptian response to the Covid-19 pandemic was inspiring, both in terms of the rise in gross domestic product, which was positive for Egypt to be one of the very few countries that recorded a positive growth rate, or the proactive policies taken by Egypt to limit the negative impact of the crisis.

He added that this type of project will support Egypt in achieving its goals, in addition to the timing of the project’s launch, as the Human Development Report in Egypt was launched for the first time 10 years ago, stressing the importance of that report, which gives an objective and accurate picture of the development path in Egypt.

He also stressed that the Ministry of Planning and Economic Development will spare no effort to complete the activities and components of the project on time, in cooperation with the ministries and other bodies represented in the project board. He thanked the Japanese ambassador and praised Japan’s keenness to deepen cooperation programs with Egypt.

The article planning: The government is making great efforts to support the response to Corona and confront its effects was written in Al Borsa newspaper.