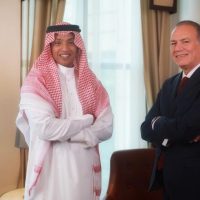 Bin Khalifa: The volume of assets represented in the units ready for delivery that have not yet been sold is 2 billion pounds

Ayman bin Mukhtar bin Ibrahim Khalifa, Vice Chairman and Managing Director for Financial Affairs and Development at Porto Group, said that the volume of investments targeted for pumping during the current year from the company amounts to 1.3 billion pounds.

Bin Khalifa, in response to the Stock Exchange’s question, explained that the volume of assets represented in units ready for delivery that have not yet been sold is 2 billion pounds, adding that the expected sales volume of the company by the end of this year is 3 billion pounds.

Jamal Fathallah and Ayman bin Khalifa assumed executive responsibility in the company’s board of directors formally since mid-April, with the approval of the board of directors on their appointment following the resignation of Muhammad Syed Muhammad Abdul Raziq from his position as Chairman of the Board of Directors.
The profits of the Porto Holding Group “Porto Group” decreased by 76% during the past year to reach 25 million pounds, compared to a net profit of 104.25 million pounds during the previous year 2019, taking into account the rights of the minority shareholders.

The company’s revenues decreased during the past year 2020 to reach 863.4 million pounds, compared to total sales of 1.74 billion pounds in the previous year.

The article “Porto Group”: 1.3 billion pounds, the volume of investments targeted to be pumped during the current year, was written in Al-Borsa newspaper.