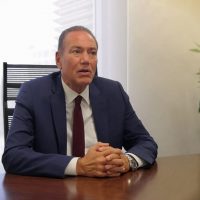 Gamal Fathallah, Chairman of the Board of Directors of Porto Group, announced the company’s plan to work very seriously during the coming period to fulfill its obligations with its customers and implement and deliver its projects according to what has been determined with its customers, despite the continuing Corona crisis, while preserving the safety of workers at project sites and employees at headquarters Administrative group.

He pointed out that the company is working within an internal development plan to restructure all departments within it in parallel with continuing work on its projects to fulfill its contracts with its customers, with the usual quality of the company and in a way that preserves the company’s reputation in the real estate market, stressing that the company has an ambitious investment plan that maintains its leadership in the sector Real estate during the coming period.

He explained that the total number of units that the company has sold to customers so far exceeds ten thousand units, with a total value of about 13 billion pounds, and more than seven thousand of them have been delivered so far, and the company plans to deliver approximately 3,500 other units this year.

He revealed that Mansour Amer no longer owns any shares or shares in Porto Holding Group in his personal capacity.

He talked about the current investors ’plan to establish a new entity in partnership with the Prime Egypt Group and the Emirati Asmak Company, whose activity is to develop and manage business, projects and investments, stressing that the company benefits greatly from the huge projects and entities owned by Porto Group and Prime Egypt in different sectors, as it can This is from entering into strategic partnerships between the public and private sectors.

He said that the company has a plan to implement 3 new projects with estimated investments of about 20 billion pounds on lands acquired by the company during the years 2019-2020, and these projects are “Golf Porto Cairo”, “Porto Asyut” and “Porto Agadir.”

He explained that the “Porto Assiut” project aims to establish a sophisticated urban complex in Assiut Governorate, which includes 500 housing units at an investment cost estimated at 4.5 billion pounds over a period of 6 years. He pointed out that work is being done strongly and continuously on this project, specifically in the first phase, which will be implemented within 3 years.

He added that the “Golf Porto Cairo” project is located on an area of ​​151 acres within the fourth phase of Al-Mostakbal City directly on Al-Amal Road and near the New Administrative Capital and Madinaty, and includes 3 thousand residential units and 500 villas in addition to international restaurants, an international school, a nursery, a mosque and administrative offices.

The article Porto Group: An ambitious strategy to fulfill contracts and deliver projects according to timelines was written in the Al Borsa newspaper.