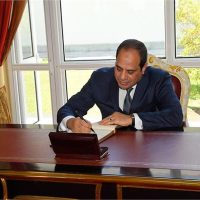 In Egypt’s statement to the United Nations General Assembly, President Abdel Fattah El-Sisi said, “The Nile River is the only lifeline for Egypt, and the policy of imposing a fait accompli has become a widespread threat to the security and stability of the entire region.”

Ali stressed that Egypt, which recognizes the development rights of its brothers, is one of the driest countries and its Prime Time Zone remain below the water poverty line, and the Nile River constitutes the only lifeline for its existence throughout history, which explains the overwhelming concern of the Egyptian citizen about the Grand Ethiopian Renaissance Dam.

This came in President El-Sisi’s speech, delivered this evening, Tuesday, via video conference technology, during the 76th session of the United Nations General Assembly.

President Sisi stressed that Egypt is closely linked to its African reality, which it is very proud of, and which is not only linked to its geographical location, but is organically related to its existence. That process is reciprocal.

He added, “Perhaps you all know the outcome of the negotiations that have been going on for a decade between Egypt, Ethiopia and Sudan as a result of known intransigence and an unjustified refusal to deal positively with the negotiating process in its successive stages and to choose a unilateral approach and a policy of imposing a fait accompli, which threatens a widespread threat to the security and stability of the region. entirety.”

In order to prevent the matter from developing into a threat to international peace and security, Egypt has resorted to the Security Council to assume its responsibilities in this file and to support and strengthen African mediation efforts through an active role of observers from the United Nations and friendly countries, and Egypt is still committed to reaching – as soon as possible – a comprehensive agreement. It is balanced and legally binding on the filling and operation of the Grand Ethiopian Renaissance Dam in order to preserve the presence of “150” million Egyptian and Sudanese citizens, and to avoid causing serious damage to the capabilities of the peoples of the two countries, based not only on the values ​​of fairness and logic, but also on a solid international legal ground that established the principle of fair and equitable use, shared water resources in international river basins.

The article: President Sisi: Egypt is committed to reaching a comprehensive agreement on the Renaissance Dam as soon as possible, which was written in Al Borsa newspaper.