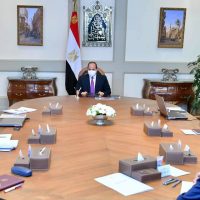 Ambassador Bassam Rady, the official spokesman for the Presidency of the Republic, stated that the meeting witnessed the follow-up of “developments in the national project for the development of the Egyptian family.”

The President directed that the main goal of the “National Project for the Development of the Egyptian Family” is to achieve a balance between population and economic growth rates, as well as upgrading the characteristics of the population, and not only achieving population control, while addressing the basic social issues and concerns of the Egyptian family.

The President also directed the integration of all the efforts of the concerned authorities in this framework with the aim of managing the population issue from a comprehensive perspective that improves the quality of life of the citizen from all health, social, family and economic aspects, with special attention to establishing accurate data bases that will achieve effective communication with all groups of society, This regard is part of the current efforts of the Decent Life Initiative to develop villages in the Egyptian countryside.

The meeting witnessed the review of the proposed executive plan for the national project for the development of the Egyptian family, which aims to improve all aspects of the lives of Egyptian citizens and families through controlling population growth and upgrading the population characteristics.

The plan is based on several axes of economic empowerment, service intervention, awareness-raising programs, education and culture, as well as digital transformation and the legislative framework, by targeting the various governorates at the level of the republic, while arranging their priorities according to the governorates most in need and highest in total fertility rates, as well as the governorates that Within its scope falls within the first phase of the national project to develop the villages of the Egyptian countryside within the initiative of a decent life.

The objectives of each axis were also presented within the executive plan of the National Project for the Development of the Syrian Family, where the economic empowerment axis aims to achieve the largest percentage of financial independence and job opportunities for women in the age group of 18-45, as well as developing positive incentive programs that help in the economic empowerment of women During the financing of one million micro-projects.

While the service intervention axis aims to provide family planning services in cooperation with NGOs and civil society organizations, while the knowledge axis helps raise the citizen’s awareness of the basic concepts of the population issue, as well as the social and economic implications of increasing the population.

The digital transformation axis also aims to establish a unified electronic system to automate and connect all services provided to the Egyptian family, and the legislative axis will also set up a governing regulatory framework for the policies taken to control population growth.

The article, President El-Sisi, following the developments of the National Project for the Development of the Egyptian Family, was written in the Al-Borsa newspaper.