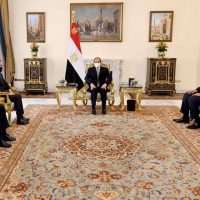 The President: Egypt will not accept harming its water interests or compromising the capabilities of its Prime Time Zone

President Abdel Fattah El-Sisi received today Jeffrey Feltman, the US special envoy to the Horn of Africa, in the presence of Sameh Shoukry, Minister of Foreign Affairs, Dr. Mohamed Abdel Aty, Minister of Water Resources and Irrigation, and US Ambassador to Cairo Jonathan Cohen.

Ambassador Bassam Rady, the official spokesman for the Presidency of the Republic, stated that the President congratulated the American envoy on his appointment to his new position, wishing him success in that mission and in dealing with regional issues, in a way that enhances security, stability and development in it, especially at a time when the Horn of Africa region is facing many The complex challenges that threaten to undermine its stability, and hence the importance of intensive US engagement to contain these challenges.

The President affirmed Egypt’s keenness to enhance bilateral cooperation with the United States within the framework of the extended strategic partnership relations between the two friendly countries and the vital role of that partnership in achieving stability in the Middle East and the African continent.

from his side; “Feltman” affirmed the US valuation of strategic relations with Egypt, in light of the political weight and the pivotal role that Egypt enjoys in its regional environment, which contributes to achieving balance in the region, and the US keenness to advance cooperation frameworks between the two friendly countries, bilaterally and regionally.

The official spokesman added that the meeting witnessed discussions on a number of regional files in the Horn of Africa, foremost of which are the developments of the Renaissance Dam file, as Feltman stressed that the American administration is serious about solving this sensitive issue given the great importance it represents to Egypt and the region, which requires reaching a fair settlement. And comprehensive.

from his side; President El-Sisi reviewed in detail the developments of the Renaissance Dam issue, stressing Egypt’s flexible approach to dealing with this issue over the past years in various negotiation tracks, which has long been based on seeking to reach a fair, balanced and legally binding agreement that fulfills the interests of Egypt, Sudan and Ethiopia, and takes into account the rights And Egypt’s interests and its water security and prevent harm to it, but all the efforts that were made during the negotiation process did not reach the desired agreement due to the absence of the political will of the other party.

The President also stressed that Egypt is still seeking to reach a fair, fair and legally binding agreement to fill and operate the Renaissance Dam, including through the negotiation track sponsored by the African Union under the capable leadership of Congolese President Felix Tshisekedi, stressing that this issue is an existential issue for Egypt. Which will not accept to harm its water interests or prejudice the capabilities of its Prime Time Zone, and hence the importance of the international community assuming its responsibilities in resolving this crisis and the vitality of the US role to play an influential role in this context.

The main article by the US envoy: The Renaissance Dam is an existential issue for Egypt, written in the Al-Borsa newspaper