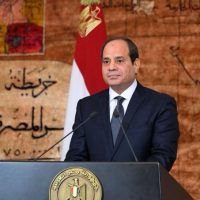 President Abdel Fattah El-Sisi directed to enhance the progress of work in the road network in Upper Egypt, to facilitate the movement of citizens and serve development projects and new urban communities.

This came during President Abdel Fattah El-Sisi’s meeting today (Monday) with Major General Amir Sayed Ahmed, Advisor to the President of the Republic for Urban Planning, Major General A.H. Ihab El-Far, Head of the Engineering Authority of the Armed Forces, and Brigadier Abdel Aziz El-Feki, Assistant to the Head of the Engineering Authority for Road Designs.

The official spokesman for the Presidency of the Republic, Ambassador Bassam Rady, said, “The meeting dealt with following up the executive position of a number of projects of the Engineering Authority at the level of the Republic.”
In this context, President Sisi was briefed on the progress of work on some construction projects in the New Administrative Capital, especially the various residential neighborhoods, as well as the interior designs of the Egypt Mosque of the Egypt Islamic Cultural Center, and its halls such as the House of the Holy Qur’an.

The meeting also dealt with the progress of work on a number of national construction projects, especially roads and axes projects, including the development of the new Jabal Ataka road, and the Upper Egypt road network, especially with regard to the development of the Upper Egypt Free Road, as well as the axis north of Luxor City, where President Sisi directed to enhance the progress of work. In the road network in Upper Egypt, to facilitate the movement of citizens and serve development projects and new urban communities in the region.

The executive position was presented to develop the road network system in West Greater Cairo, especially in Giza Governorate, where the President constantly directed efforts to build and raise the efficiency of roads in West Cairo, as well as vital traffic axes linking West Cairo with its East, to accommodate the movement of citizens who use those roads and axes, and to eliminate Traffic jams and solving the problem of overcrowding, within the framework of the state’s national plan to modernize the road network and traffic hubs.

The Spokesman added that the President was also briefed on the developments of the executive position of a number of other construction projects at the level of the Republic, such as the project to develop El Alamein International Airport and its halls and facilities, which will depend on the latest technology used in international airports.

The article by President El-Sisi directing to strengthen the progress of work in the road network in Upper Egypt was written in Al Borsa newspaper.