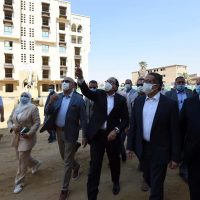 El-Gazzar: Restoring the civilized facade of Cairo by planning slums and transforming them into tourist attractions

Dr. Mostafa Madbouly, Prime Minister, said that the government is determined to complete development projects in Cairo Governorate as soon as possible, in implementation of the directives of President Abdel Fattah El-Sisi, President of the Republic, especially projects to develop the areas of Historic Cairo and Old Egypt. To restore the city of Cairo to its civilized appearance, stressing that this requires accelerating implementation rates during the current stage.

The Prime Minister started this afternoon an inspection tour of a number of development projects being implemented in the Old Cairo area in Cairo Governorate. Minister of Housing, and Major General Khaled Abdel Aal, Governor of Cairo.

The Minister of Housing reviewed the developments in the implementation of the project to develop the wall of Magra El-Oyoun and the surrounding area, explaining that this project aims to restore the civilized facade of the city of Cairo, by re-planning slums and transforming them into tourist attractions highlighting the capital’s history and ancient civilization.

He pointed out that the project, which is being built on an area of ​​95 acres, includes the construction of many residential, commercial, cultural and service buildings, as the project consists of 79 heritage buildings, comprising 1942 housing units, and the area of ​​each building is 600 meters, while the area The residential unit is 150 meters, in addition to 18 commercial units, a commercial and recreational building, as well as parking spaces, and it is scheduled to work to pressure the implementation rates during the coming period to complete the project.

He explained that there are 77 buildings under construction, and two buildings are under study, pointing to the completion of the concrete structure and buildings for 27 buildings. Work is underway to implement the facades and interior finishes for a number of residential units.

The article The Prime Minister: Completing development projects in Cairo Governorate as soon as possible was written in Al Borsa newspaper.