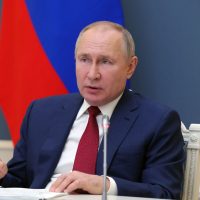 Russian President Vladimir Putin said that his country has raised natural gas supplies to Europe by 15% in total and is ready to increase it in the amount requested by the partners, denying his country’s use of gas as a weapon for political pressure.

“We are increasing natural gas supplies to Europe, and in total, these supplies have increased by 15%,” the Russian president added, in a speech at the “Russian Energy Week” forum today, Wednesday.

The Russian president explained that his country has increased supplies by 10% through gas pipelines and by 13% for liquefied natural gas, stressing that Russia has always implemented its contractual obligations to supply gas to Europe.

President Putin stressed that his country never uses gas as a weapon of political pressure, adding: “Even during the most difficult periods of the Cold War, Russia regularly and consistently fully fulfilled its contractual obligations and supplied Europe with natural gas.”

The article, Putin: Russia has increased gas supplies to Europe by 15%, and is not using it as a weapon of pressure. It was written in Al Borsa newspaper.