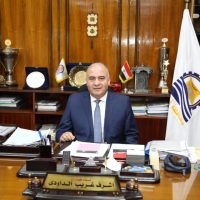 Qena Governor Ashraf El-Daoudy said that the implementation of 1,402 projects related to the local development program in Upper Egypt has been completed in various sectors at a cost of 3.6 billion pounds, which contributed to providing 149,000 direct and indirect job opportunities, and many other projects are being implemented according to the established timetables. Through periodic follow-up of project sites, and check on the progress of work.

This came during the expanded meeting held today, Thursday, with the delegation of the Local Development Program in Upper Egypt, in the presence of Hazem Omar, Deputy Governor, Dr. Deputy Director of the Program for Planning and Development, Dr. Alaa Shaker, Director of the Program Implementation Unit in the governorate, representatives of the World Bank, members of the Program Coordination Office, heads of local units of centers and cities, and members of the implementation unit in the governorate.

The governor reviewed the executive position of the service projects that are implemented through the program, explaining that in addition to the implementation of projects, the program works to develop the capabilities of workers in government institutions through training programs and workshops, noting that 95 training programs and 31 workshops were organized from which 3,744 benefited. trained.

For his part, Dr. Hisham Al-Helbawi thanked the governor of Qena and the executive body for maintaining the efforts made during the past period and the actual achievements that have been made on the ground since the start of the implementation of the program, calling on the implementation unit in the governorate to exert more effort to preserve what has been achieved and achieve the program objectives in Access to comprehensive and sustainable development.

In turn, Muhammad Nada, the technical support team official in the program, stressed the importance of maximizing local revenues in the governorate centers, which are represented in (parking – advertisements – markets – car parking revenue in the main streets of cities) with the aim of raising the percentage of local contributions to the funding pumped by the government to implement projects in order to ensure the continuity of development plans in those centers after the end of the program implementation period in 2023.

The article, Qena Governor: Implementation of 1402 projects in the Local Development Program in Upper Egypt, at a cost of EGP 3.6 billion, was written in Al Borsa newspaper.