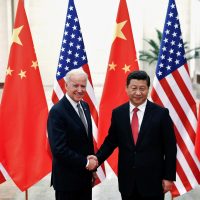 It was reported that US President Joe Biden and his Chinese counterpart, Xi Jinping, are planning to hold a virtual meeting before the end of this year.

Reuters and CNBC published reports, citing officials in the US administration, indicating that the two leaders agreed in principle to hold a virtual bilateral meeting.

The agreement on the virtual meeting comes with the Chinese president not planning to attend any multilateral events in person, including the G-20 summit, the climate summit and the Asia-Pacific Economic Cooperation forum.

White House National Security Adviser Jake Sullivan held a six-hour meeting in Zurich with his Chinese counterpart, Yang Jiechi, on several issues including Taiwan and the trade dispute between the two countries.

The article reports: “Biden” and “Jinping” plan to hold a virtual meeting before the end of the year was written in Al Borsa newspaper.