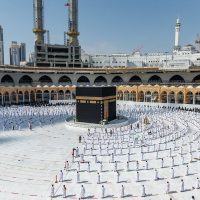 The Kingdom of Saudi Arabia has adopted “immunization” against the emerging corona virus as a condition for entering the Two Holy Mosques, according to the “Al-Arabiya” channel.

The General President for the Affairs of the Grand Mosque and the Prophet’s Mosque, Sheikh Dr. Abdul-Rahman bin Abdulaziz Al-Sudais, confirmed in a statement today, Tuesday, the condition of a “fortified” entry into the Two Holy Mosques, indicating that it embodies the leadership’s concern for the health of the worshipers of the Two Holy Mosques and their destinations.

He added that the Kingdom’s leadership has spared no effort to take all preventive and precautionary measures that contribute to ensuring the performance of rituals and acts of worship in the Grand Mosque and the Prophet’s Mosque in a healthy environment that meets all global health standards used in confronting the global pandemic.

Al-Sudais called on everyone who arrives to the Grand Mosque and the Prophet’s Mosque to adhere to the instructions and procedures recommended by the relevant authorities to limit the spread of the global pandemic.

The Ministry of Municipal and Rural Affairs and Housing in Saudi Arabia had stipulated that immunization with the Coronavirus vaccine should be applied to workers in Hajj and Umrah activities and shops in the cities of Makkah and Madinah, starting from the first of Ramadan for the current year, in order to protect public health.

The Ministry confirmed that in the event that no worker is immunized in these activities, he must perform a PCR examination every 7 days, at the expense of the facility in which he works, to ensure that he does not carry the Corona virus.

The relevant authorities in Saudi Arabia had previously announced that it is mandatory to vaccinate workers in several areas against the Corona virus or to conduct a weekly PCR examination, starting from 1 Shawwal.

The areas in which it is necessary to immunize workers include: restaurants and food shops, men’s barbershops, women’s beauty salons, gyms and sports centers, all workers in various public transport means, and workers in tourist accommodation facilities.

The article “Saudi Arabia” adopts a new condition for entering the Two Holy Mosques … you know it, it was written in the Al-Borsa newspaper.