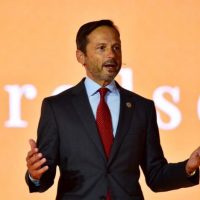 Saudi Arabia plans to raise up to 10 billion riyals ($2.67 billion) next year for the Amala project, one of its tourism projects on the Red Sea coast, John Pagano, CEO of the Red Sea Development Company and the AMAALA project, said.

Amaala resort is being built on the northwestern coast of the Kingdom on the Red Sea, in addition to the “Red Sea” project, as part of Saudi efforts to diversify the country’s economy by promoting new sectors such as tourism. Both projects are environmentally friendly and will rely on renewable energy sources.

The expected “green” funding for the Amaala project will come after a larger loan obtained earlier this year to finance the Red Sea project.

“We will go to the market, perhaps sometime next year, to fund AMAALA, especially with respect to the first phase of the project,” Pagano told Reuters on Tuesday.

He expected the loan to range between five and ten billion riyals, which comes after 14 billion riyals arranged by the company this year. “I expect it to be towards the lower end of that range,” he said.

The loan for the Red Sea project came from four Saudi banks to finance the construction of 16 new hotels. Pagano said Amala’s financing would be for the construction of nine hotels in the first phase, saying the facilities were slated to open in 2024.

Amaala and the Red Sea Project, which are wholly owned by the Saudi Public Investment Fund, are likely to merge into the Red Sea Group by the end of this year.

“Bringing the two institutions together is a natural progression,” Pagano said.

He added that once the two projects are completed, their assets may be collected in a real estate investment fund backed by hotels and may be listed on the Saudi Stock Exchange as a way to attract a variety of investors.

“We may see that soon, perhaps in 2024 or 2025. We need to open hotels, we need to start work and achieve a reasonable amount of stability so that we can have the right liquidity,” he said.

The article “Saudi Arabia” aims to raise $2.67 billion in green financing for the “Amala” project was written in Al Borsa newspaper.