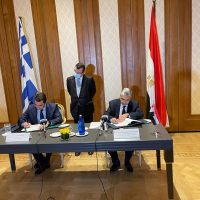 The Ministry of Electricity and Renewable Energy and the Ministry of Environment and Energy of Greece signed a memorandum of understanding to study the establishment of the electrical interconnection project between the two countries through a submarine electric cable that provides a direct connection for the exchange of electricity between Egypt and Greece and extends to the single market of the European Union.

This came today, Thursday, on the sidelines of the visit of the Minister of Electricity and Renewable Energy and his accompanying delegation to Greece; To discuss aspects of joint cooperation with regard to electrical interconnection between the electricity transmission networks in Greece and Egypt.

The Ministry of Electricity stated – in a statement today – that the electrical interconnection project achieves many technical, economic, environmental and social benefits. The project aims to establish a strong interconnection network in the Eastern Mediterranean to improve the security and reliability of energy supply, help in the event of breakdowns, interruptions and emergencies on transmission networks, raise the degree of security of electrical supplies, and stimulate regional cooperation, peace and prosperity.

The project also aims to promote further development and increase the participation of electricity generated from renewable energy sources in electrical interconnection projects and in the electricity mix at both the national and regional levels. Africa.

It is noteworthy that the project represents an important part of the current strategic relations and cooperation between the two parties, which accelerates the development of the energy corridor by increasing the supply of electric power to both Egypt and Greece, while achieving a balance in energy demand, and stimulating response to the challenges of climate change and reducing emissions, which helps In turn, in preserving and protecting the environment by using all available energy sources, especially taking advantage of renewable energies, the project is also an important step forward to achieve the required compatibility to support the integration of renewable energy in the energy networks of the two countries.

The article: The signing of a memorandum of understanding for the electrical connection between Egypt and Greece was written in Al Borsa newspaper.