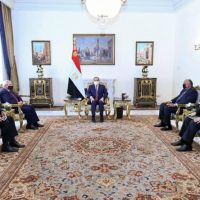 President Abdel-Fattah El-Sisi affirmed the strength of the decades-old strategic relations between Egypt and the United States, and Egypt’s keenness to strengthen those relations, especially in light of the turbulent regional reality in the region and the escalating challenges it presents, foremost of which is the growing threat of terrorism.

This came when President El-Sisi received, today, Thursday, Senator Robert Menendez, Chairman of the US Senate Foreign Relations Committee, in the presence of Foreign Minister Sameh Shoukry, Chief of General Intelligence Abbas Kamel, and US Ambassador to Cairo Jonathan Cohen.

The official spokesman for the Presidency of the Republic, Ambassador Bassam Rady, stated that President Sisi welcomed Menendez on his visit to Cairo, pointing to the importance that Egypt attaches to permanent communication with congressional leaders within the framework of coordination and consultation between the two friendly countries on various issues.

from his side; Menendez stressed the great importance that the United States attaches to relations with Egypt, praising the distinguished level of joint cooperation between the two countries, noting that Egypt is a pillar of security and stability in the Middle East and the Arab world, as well as a pivotal partner for the United States in the region, expressing great appreciation for Egypt’s role The successful under the leadership of the President in combating terrorism and extremist ideology and establishing noble concepts and values ​​of freedom of belief, tolerance and a culture of acceptance of the other, in addition to the great efforts being made inside Egypt to achieve comprehensive and sustainable development for the benefit of citizens.

The Spokesman added that the meeting touched on the current developments on the regional arena and the crises the region is going through, as consensus was reached on the importance of expediting political solutions to these crises, in a manner that preserves the unity of countries and preserves their national institutions and the capabilities of their Prime Time Zone, with an emphasis on the vital Egyptian role. In this regard.

In this context; Menendez reiterated the US administration’s appreciation for the Egyptian efforts towards calming the Gaza Strip and containing the recent escalation. President Sisi affirmed – in this context – Egypt’s support for various efforts aimed at revitalizing the peace process and resuming negotiations, and Egypt’s firm position in this regard by reaching a just and comprehensive solution that guarantees the rights of the Prime Time Zone. The Palestinian Authority and the establishment of its independent state in accordance with international references, thus opening prospects for peaceful coexistence among all the peoples of the region.

They also discussed the developments of the Renaissance Dam issue in light of the existing and continuous coordination between the two countries in this regard, where President Sisi stressed the importance of adhering to the implementation of what was stated in the recent presidential statement of the Security Council of the parties’ compliance to reach a fair and binding legal agreement within a short period that guarantees clear rules for the process of filling The operation of the dam achieves the common interests of all parties.

The article “Sisi” confirming the strength of the decades-old strategic relations between Egypt and the United States was written in Al Borsa newspaper.