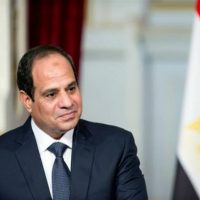 President Abdel Fattah El-Sisi stressed the importance of reaching a fair and balanced legal agreement on the filling and operation of the Renaissance Dam. In a manner that preserves Egyptian water security, as well as achieves the interests of all parties, and maintains regional stability; Taking into account the need for the international community to continue to play a serious role in this file, in addition to demonstrating the necessary goodwill and political will from all parties in the negotiation process, in line with the presidential statement issued in this regard by the UN Security Council;

The Spokesman for the Presidency of the Republic, Ambassador Bassam Rady, stated that the call dealt with discussions on the developments of the Renaissance Dam issue, and discussing the ongoing preparations for hosting the city of Glasgow for the next session of the Conference of Parties to the United Nations Framework Convention on Climate Change, where it was agreed on the need to strengthen joint coordination between the two countries to ensure results. Positive from this session in a way that enhances the work of the international community in light of the current global climate crisis, and in light of the importance of the Egyptian role in climate issues at the regional level, as well as Egypt’s endeavor to host the next session of the conference during 2022.

The contact also dealt with discussions on the most prominent files of bilateral relations between the two countries and ways to develop them, especially in the field of defense, security, and combating terrorism, in addition to revitalizing the British tourism movement to Egypt.

The developments of a number of regional issues of common interest, especially Libya, were also discussed. It was agreed to support the existing political track in order to hold the desired electoral elections on its due date at the end of this year, in addition to the importance of the exit of all foreign forces and mercenaries from Libyan territory.

The article “Sisi” assures the British Prime Minister of the importance of reaching a fair and balanced agreement on the “Renaissance Dam” that was written in Al Borsa newspaper.