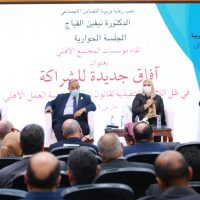 Nevin Al-Kabbaj, Minister of Social Solidarity, held a meeting today with representatives of 77 civil societies, in the presence of Dr. Talaat Abdel-Qawi, President of the General Federation of NGOs and Institutions, under the title “New Horizons for Partnership”, to introduce the executive regulations of the Law of Civil Work Practice No. 149 of 2019 and review the advantages of the new regulation.

She emphasized the pioneering and tangible role of civil society institutions as a key partner for the state in achieving sustainable development plans and goals, reflecting a new phase led by a conscious political leadership that believes in continuous development.

The Minister of Social Solidarity added that President Abdel Fattah El-Sisi responded to the demands of civil society in order to create a legal framework that allows flexibility for civil work, with a clear awareness that civil society is an essential partner in development, in appreciation of its importance and the importance of opening new horizons for rights and freedoms in Egypt.

And she continued: “The Ministry of Social Solidarity is proud to work with civil society and is working to develop mechanisms to support civil work institutions to ensure the implementation of the law and its executive regulations that have been developed in partnership with all partner parties.”

She pointed out that the ministry is working to develop mechanisms to support civil work institutions to ensure the implementation of the law and its executive regulations, which have been developed in partnership with all partner parties.

Al-Kabbaj explained that the Egyptian state, like other countries, is undergoing many rapid and successive changes at the same time, and during the previous period it was able to overcome political, economic and social conditions witnessed by history, especially in the tangible efforts to rebuild the societal map and rid it of various forces that are counter to construction and impede development.

She indicated that “the state” here means the various institutions, whether it is the government, civil society, the private sector, the media, or others.

She said that Egypt was able to achieve some noteworthy achievements during the previous period, including but not limited to: a set of economic reforms aimed at addressing the structural problems that the Egyptian economy has suffered from for years and that have made tangible progress during the previous period, and a package of social policies to protect groups. First care, on top of which is early childhood andchildren Of school age, Prime Time Zone with disabilities, women, informal workers, and pensioners.

She continued: “In addition to the geographic targeting of remote areas, the most important of which is southern Egypt, as well as the expansion of social housing programs and modern housing to which residents are transferred from unsafe areas and the” decent housing “programDecent life“Which culminated in the presidential and national program“ developing Egyptian villages ”, improving health and educational services, working to raise the efficiency of the infrastructure and facilities that provide services to citizens, and strengthening programs for empowering women at all health, economic and political levels, with a focus on engaging women in the labor market and increasing opportunities Financial inclusion and access to financing for small and micro projects.

Al-Kabbaj added that civil society institutions and organizations are voluntary, non-governmental and non-profit institutions, and they work on all social, economic, health, educational, cultural, environmental and other levels. Rather, its greater and supreme goal is to improve the human being and invest in the energies of society to improve development indicators.

She pointed out that it seeks the country’s development and prosperity in an integrated, balanced, fair and sustainable manner, as well as increased awareness and focus on issues of social responsibility in addition to charitable work: targeting radical, collective and integrated solutions to address many issues related to poverty, low standard of living for some groups, unemployment, and a growing interest in development. Social support and the importance of establishing partnerships to attract and accumulate capital, which will positively affect the increase in domestic and foreign investment.

She added that the Ministry realizes that civil society organizations play a crucial role in the renaissance of local communities and in the development of community development associations, given their technical expertise and their proximity to and representation of local communities and also their proximity to these associations and their partnership with them because they realistically help in implementing many of the interventions that Carried out by large associations.

She indicated some of the challenges that must be addressed by insufficient coordination, the low percentage of mechanization and networking between various institutions, limited capabilities or human, technological and informational cadres, setting highly ambitious goals, and unrealistic limitations in time, budget and other topics.

For his part, Ayman Abdel Mawgoud, Assistant Minister of Social Solidarity for National Work Institutions Affairs, said that the implementation of the executive regulations of the Civil Associations Law is a new era and a new start for civil work institutions in Egypt, as it has many advantages.

The article “Solidarity” discusses with 77 civil society the benefits of the executive regulations for the Civil Work Practice Law, it was written in the Al-Borsa newspaper.