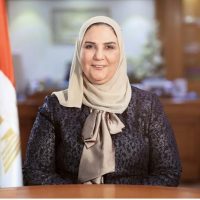 The National Project to Preserve the Egyptian Family, Muddah, launched the fifth phase of university student training, where the first training was launched from Alexandria University.

The Ministry of Social Solidarity said in a statement today that the fifth phase aims to implement 650 trainings for 32,500 students at the level of 8 universities. Cairo, Ain Shams, Helwan, Alexandria, Port Said, Suez, Assiut, and South Valley.

She explained that the training is being implemented in cooperation with the Ministry of Higher Education and Scientific Research and the United Nations Population Fund, and the trainings are being implemented by a network of faculty members who have previously been trained and prepared by the project.

She pointed out that the training is based on a training scientific content that was launched in February 2019 and approved by the Supreme Council of Egyptian Universities.

She said that the exercises covered three basic dimensions; The social and psychological dimensions, the religious dimensions, and the reproductive health dimensions in family life, which contribute to preparing young Prime Time Zone who are about to marry with basic knowledge that enables them to choose a life partner on sound foundations and build a stable family away from problems.