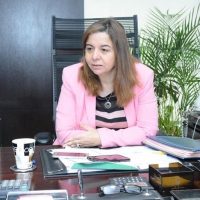 Abdul Hamid: Text messages to the detainees with the result of the screening to complete the procedures in my cases, applicable or non-applicable

Mai Abdel Hamid, CEO of the Social Housing and Real Estate Finance Support Fund, said that the fund began examining and sorting the documents of the detainees within the announcement of the presidential initiative “Housing for All Egyptians 2” for low and middle incomes, which opened the door to apply for reservations on August 8, and the period has been extended. Registration is until Monday, October 4, as part of the Central Bank of Egypt’s new initiative to provide real estate financing at an interest rate of 3% for a period of up to 30 years.

She added that the initial examination and sorting of documents and data registered by the detained citizens through the fund’s website aims to identify those who are subject to the conditions and who do not meet the conditions in accordance with the previously announced controls, and to ensure that all the documents required in the conditions booklet are met.

She explained that the number of those who paid the serious advances of reservation within the announcement of the housing units ready for immediate delivery “two rooms and a hall – and three rooms and a hall” for low and middle-income citizens amounted to nearly 46,000, while the number of bookers registered on the fund’s website reached more than 43,000 citizens.

The number of citizens who paid serious advances to reserve housing units under construction “three rooms and a hall” that will be delivered within 36 months, and for middle-income citizens only, reached nearly 12 thousand citizens, and the number of bookers registered on the fund’s website is more than 11 thousand citizens.

Abdel Hamid said: With regard to the announcement of the housing units under construction (three rooms and a hall) that will be delivered within 36 months, and for middle-income citizens only, and presented in the following cities: Badr, Gardens of the Capital, May 15, October Gardens, October 6, the tenth of Ramadan New Aswan, New Alamein, New Minya, Nasser, New Rashid, New Beni Suef, Hurghada “Al-Badari” and Port Fouad. Projects in the event that the number of applicants exceeds the number of units available in them, and with regard to citizens who meet the conditions, they will be able to pay the quarterly payments due to them – according to what is stipulated in the conditions book – starting from January 1, 2022, with a number of 12 quarterly payments during the implementation period “Three years”.

She indicated that text messages will be sent to all the detained citizens whose requests will be sorted, who have paid the seriousness of the reservation for the housing units and registered their requests on the fund’s website, including the results of the sorting and the subsequent procedures followed by the citizens, whether they meet the conditions or do not meet the conditions.

She added that the door will be opened for submitting grievance requests to citizens who do not meet the conditions as a second opportunity to complete the required and incomplete documents to amend their position from not applicable to applicable, in addition to not accepting grievances from citizens who are found not to meet the conditions at the time of submission, regarding the non-applicability of the income condition “exceeding income”. to the maximum and less than the minimum”, as well as the non-applicability of the age condition previously announced in the specifications, with the possibility of accepting grievances without that provided that incomplete documents or data are completed, or signing the acknowledgment and the attachment form in case the signatures are not met.

The article began sorting the documents of the detainees in the units of “Housing for all Egyptians 2” for low and middle-income Prime Time Zone, it was written in Al Borsa newspaper.