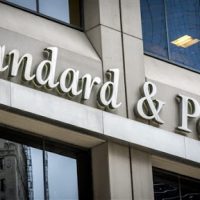 Standard & Poor’s, in its quarterly report on banks and companies in the Middle East, said that the creditworthiness of Egyptian banks is closely related to the merit of the Egyptian government, as banks invest heavily in government securities.

She explained that during the past years, banks’ investments in treasury bills and bonds supported the profitability of Egyptian banks, and allowed them to employ their surplus liquidity, which led to an increase in the correlation between the banks’ ratings and the state’s rating.

The exposure to sovereign debt represented 34% of the total assets of the banking sector in March 2021, and although Standard & Poor’s believes that banks will expand more in lending to customers during the coming period, but it is still likely that treasury bills and bonds will constitute a larger proportion ranging between 30 and 35% of banks’ assets. by the end of next June.

She pointed out that the impact of the epidemic on economic growth will be less severe than in other countries, despite the slowdown in growth during the last fiscal year, but Egypt did not witness a downturn in the Gregorian year 2020, but rather recorded a real growth in GDP of 1.5% thanks to the relatively limited closure measures, Increased healthcare capacity, higher remittances.

The agency suggested that the non-performing loans would rise to between 6 and 6.5% of the total loans by the end of June 2022, compared to about 3.5% currently, with the emergence of the Corona’s repercussions more clearly on the tourism sector and small and medium-sized companies, but it believes that the banks’ allocations and their income before allocations are more than enough to cover That increase, and expected credit losses to range between 150 and 200 basis points during 2021 and 2022.

It expected the liquidity of Egyptian banks to remain strong, due to the low rates of loan utilization to customer deposits, which are growing very quickly. Despite global uncertainty, deposits grew by 20% during the last fiscal year.

On the level of the local economy, the agency said that although Egypt succeeded in avoiding the economic downturn, despite what the tourism sector, which represents 12% of the GDP in 2019, received a strong shock, but it was compensated by the greater growth in other sectors led by private and government consumption, and the rise in remittances that represent 8.2% of GDP, surprisingly, 10.5% during 2020, compared to a decline of 1.6% in low- and middle-income countries.

It expected the budget deficit in Egypt to record an average of 7% of the GDP during the period from 2021 and 2024, supported by the decline in interest payments accompanied by revenue growth.

The agency said that the maturities of the short-term external debts of the Egyptian government and the Central Bank are large, amounting to about 21 billion dollars during 2021, however, approximately 70% of it is owed by the Central Bank, most of which are debts that include Gulf deposits that are likely to be made. Deported by the United Arab Emirates, Saudi Arabia and Kuwait.

The article Standard & Poor’s: Egyptian banks tend to increase their loans at the expense of government papers was written in Al Borsa newspaper.